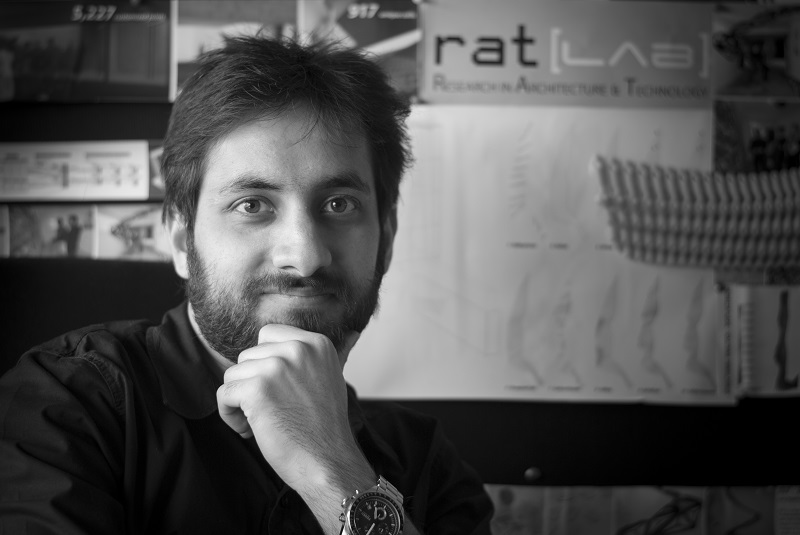 An Architect, computational designer, educator by profession and artist at heart, Sushant Verma has combined all his skills and passion into the organization rat[LAB] which he co founded in 2012 in London along with Pradeep Devadass. rat[LAB] EDUCATION, is an independent initiative to spread the idea of computation in design profession & education in India. Mr Sushant was a former architect at ZahaHadid Architects, London and a Sr. Editor at Arch2O; he has held teaching positions at a number of universities internationally and is involved in education for computation & parametric design. He is also a recipient of MAK Schindler Award from Vienna / Los Angeles and a finalist for AIA Emerging Leaders Fellowship from Chicago.

His work is widely published and exhibited in London, Los Angeles, New York, Tokyo, San Francisco, Taipei, New Delhi, and Mumbai among other places. He has been shortlisted in New Delhi among 5 architects for ’20 under 35’ Exhibition at Alliance Francoise de Delhi, featured as iGen 2017 Top 50 Gen-Next Designers in India, tagged as ‘Rising Star’ by Surfaces Reporter India. Sushant joined the elite list of TEDx Speakers by speaking at TEDxGurugram on ‘Smart Cities need Smarter Design Education’.

Having a strong interest in computers and technology, Sushant Verma Strives to innovate design as a technique, method and practice using technology at the core. “I have a strong passion for design of spaces and forms, right down from the scale of furniture, up to the scale of a city. I feel fortunate to be involved in all of this through my design practice that currently operates from New Delhi, India.” he says.

Here are some insights about Mr Sushant Verma shared with the team ABT.

Tell us about the journey of rat[LAB] and its evolution
It was the summer of 2012 at Architectural Association (AA), London when me & Pradeep were working on our Masters Thesis Research and were candidly discussing about need of research in design practices and lack of use of technologies. We were developing our work on adaptive[skins] (www.adaptiveskins.com) project at that time, where the aim was to build an architectural system that can respond to changing environment and physically transform over time, with self-generated energy. Due to complexity of the problem, a lot of research was required; something that AA inculcates in you right from the beginning. It was during those days that we started rat [LAB] in order to expand our understanding of ‘Research’, ‘Architecture’ & ‘Technology’ that helped us acronize the organization name. What followed that conversation is years of efforts to formalize ourselves into a design practice that strongly believes in research with design. Going ahead with our core ideology of connecting ‘Design’ & ‘Technology’ through ‘Research’ & ‘Computation’, we are now happy to establish ourselves as computational experts to collaboratively work with designers across all creative domains. The Research part, however, is not limited to theoretical research but more focussed on advanced computational methods that can catalyse a design workflow or optimize the project in one or many ways.

Today, rat[LAB] runs as a design studio in New Delhi providing design & technology consultancy to organizations and individuals in India and abroad. The organization operates on a collaborative model and has global associations in USA, UK, and Europe & Asia to bridge the gap between design and technology.

What is your view about the changing role of technology in architectural designs?
Technology has become an integral part of our lifestyles in the 21st Century. The pace at which technologies are emerging and evolving is incomparable to any other stream and to any other era in time. Today, we are moving faster than ever, and the way we communicate, interact, function as a society, is all affected largely by technology at large, and micro-technologies that are embedded in our lives now.  Design industry has been trying to catch up with this pace, and architecture is not left behind. We have has a plethora of technologies affecting manufacturing and construction industries in all these years. It is now time when design as a process has also been evolving through the use technologies. Computational Design is one of the many technologies that dominate and contribute to these changing times of design.

We extensively use ‘Computational Design’ Methods and Parametric Design Techniques in our work at this stage. We develop new technologies within our studio to streamline design processes and to drive a smarter output. We developed new techniques and micro-technologies such as adaptive façade system using SMA, cost & structure optimization algorithms, water flow algorithms for urban projects, visibility graph analysis methods, etc which are widely used in our works at all scales.

Tell us about any one of your most prestigious designs/project.
The most significant project (and challenging too) has to be ‘adaptive [skins] or ‘adaptive [systems]’ project. It is a project that we started in London as part of an academic research and build upon it in various iterations in Los Angeles later on. It was started with a sole vision of challenging the static built environment against the dynamic natural environment, where numerous layers of architecture come together to make a building function in negotiation with changing environmental parameters such as sun, rain & wind.

The research has taken a series of iterations from 2012 to 2014, with the latest developments shaping up in Los Angeles, CA at The MAK Center. A dynamic façade system was designed as a proposal for MAK’s Exhibition Space at the site of Mackey Apartments, which was designed by one of the pioneers of Modernism – Rudolph Schindler in 1939.  Material Intelligence was a major part of our research from project adaptive [skins], carried out in London, followed by adaptive [systems] Installation exhibited in Los Angeles. As designers, we sometimes miss out on potentials of materials themselves, and start to use them as a secondary layer.

It is in these materials and their materiality that potentials can be explored, analyzed& put to a smart use. This is exactly where technology helps in complex studies of a material. For instance, we used SMA (Shape Memory Alloys) made of Nickel & Titanium as actuators in a project to make dynamic & moving elements. Structural studies of the material could only be possible using digital simulations (computation) and physical experiments. If we start to use potentials of various materials to outgrow their conventional potentials, we can possibly develop smarter design systems.

If you were to do one thing differently, what would that be?
I would have loved to make the effort to change design education in India, while I was a part of it as a student. As design students, we do realize many a times that there is something missing largely in the system. Not many step up to change that as we are a part of a larger system that continues to be static. Today, as a designer, and as an educator, I am taking small steps to positively affect design education. Wishing to have started earlier, it may have made a large difference by now.

What would you like to achieve in the next 3 years?
Possibly more of projects and research that can help built environment in direct and indirect ways, and positively affect lives of people.Hopefully an impact in design education so we can have smarter designers building smarter cities soon. As far as work goes, it is hard to predict where we would be by that time. If we start to analyze our evolution & growth, it has certainly been a roller-coaster ride for the entire team, which continues to evolve with our methods. Since we use technology at the core of our practice, and like to evolve rapidly with changing technologies, it is quite certain that we would continue the same approach and would potentially have tech-embedded design environments in near future.

Our work should ideally follow the same pace and we hope to be able to demonstrate this through built as well as Unbuilt projects that form the plethora of design research we nurture in the practice. Computation and other tech-tools and methods would certainly be a part of the work that we aim to do in future. We are hopeful that scale of work should increase to be able to make larger global impacts. We look forward to a very exciting and collaborative future!

Keeping Alive, the Human Element in the fast-paced Digital Age