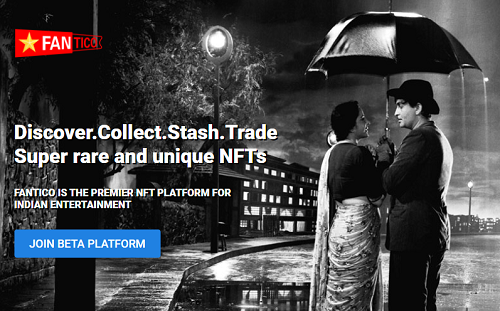 SINGAPORE, August 4, 2021 – Vistas Media Capital, a Singapore-headquartered media investment holding company, announced that it has expanded into the blockchain entertainment business with the launch of Fantico, an innovative non-fungible token (NFT) platform. Fantico will allow entertainers to create and auction their own collectibles for investors, superfans and collectors.

The NFT trading platform will feature an exclusive collection of digital artworks from luminaries from different backgrounds such as cinema, sports, music, art. In addition, exclusive collectibles including antiquarian books from the traditional world of auction house will also be available for sale.

NFTs are permanent digital certificates of ownership that are secured and encrypted using blockchain-enabled technology. This allows buyers of such digital collectibles to have permanent ownership of such assets which are enabled and secured on a blockchain. Through Fantico, NFT buyers can purchase Indian cinema-focused exclusive digital collectibles as well as originals either through a sale or auction.

The digital collectables available on Fantico include digital art assets from critically acclaimed movies and memorabilia during the ‘Golden Age’ of Indian cinema. Some of the assets available include the original booklet of nobel laureate Rabindranath Tagore’s debut film Natir Puja in 1932, based on his 1926 play, the original theatrical artwork of celebrated epic Mughal-E-Azam, showcards of 1975 cult classic Sholay bearing the signature of its designer C Mohan and the single largest collection (spanning over two decades) of original preserved Bollywood negatives since 1944, from the Kamat Foto Flash’s personal archives.

Fantico is majority owned by Vistas Media Capital and aims to digitise the traditional auction market with blockchain technology. With this platform, NFTs buyers will be able to easily access digitally authenticated and high-quality collectibles. The platform intends to disrupt the traditional auction market by using technology to unlock greater value for these assets through democratising and re-valuing an asset class which in the past was only available to avid fans, who would need to spend large sums of money to acquire these collectibles. Fantico will also collaborate with renowned brands and content creators to help determine the valuation of its catalogue of rare and exclusive items.

Abhayanand Singh, Group CEO and Co-Founder of Vistas Media Capital, said, “Fantico is a result of a partnership between entities from the world of media and entertainment and individuals with huge experience in blockchain. Together, we intend to become the largest fan engagement platform where celebrities and creators can commercially engage with their superfans, collectors and investors.”