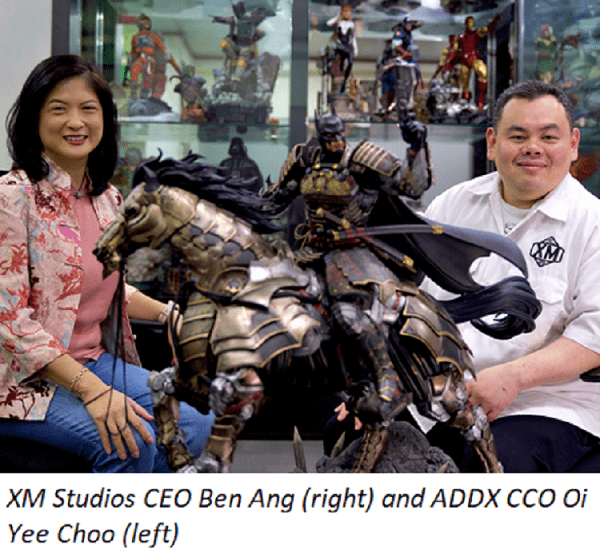 Founded in 2012, Singapore-based XM Studios has seen a strong increase in revenues along with an expanding network of licensing agreements. In 2020, revenues more than doubled to S$16.9 million from S$7.9 million the year before, while the company also recorded a net profit of over S$4.2 million in 2020.

To take full advantage of the benefits of digital securities, the entire offering was tokenised on the ADDX platform, with no parallel non-digital issuance. Heliconia anchored the deal with a S$1-million investment. Other international accredited investors took part on the same terms as Heliconia, in an offering that was over 1.75-times subscribed based on the company’s fundraising target. To accommodate high demand from investors during the subscription phase, the size of the deal was increased from S$3 million to S$4.5 million. The raised capital will be used for the expansion of XM Studios’ premium and premium mass collectibles business in new markets and the acquisition of new intellectual property licenses, as well as for general working capital purposes.

XM Studios is a Singapore-based global design studio specialising in the creation of premium collectibles. Among the major intellectual property licenses it holds are Marvel, Star Wars, DC Comics, and Sanrio. Hand-crafted and hand-painted, these collectible statues are made with intricate attention to details such as fine zips and buckles. They also come with “switch out” parts to reflect how the character would look in various settings and moods. Depending on complexity and size, the statue collectibles have prices ranging from under S$1,000 to as much as S$6,000 each. XM Studios makes the collectibles in collaboration with a team of international sculptors, illustrators and designers, and distributes them via a global network of 20 key distributors.

Ben Ang, Chief Executive Officer of XM Studios, said: “XM Studios has grown from a humble shop in Singapore’s Bras Basah Complex into a global brand. The fundraising on ADDX was designed to allow fractional access at a minimum investment of just S$10,000, because we wanted to provide long-time XM Studios fans with the chance to take part in the growth of the company.”

Oi Yee Choo, Chief Commercial Officer of ADDX, said: “The new line of equity-linked products on ADDX offers investors a chance to diversify their portfolios through companies experiencing faster growth. Before these products are listed on ADDX, they go through a robust due diligence and listing committee process[6]. ADDX also strongly favours listings with reputable lead or anchor investors, such as Heliconia in this case. Furthermore, the fractional sizes enabled by digital securities empowers investors to take on just the right amount of any investment for their current portfolios.”

Founded in 2017, ADDX is an integrated issuance, custody and exchange platform for digital securities regulated by the Monetary Authority of Singapore (MAS). The financial technology company is backed by Singapore Exchange, Heliconia Capital and Japanese investors JIC Venture Growth Investments (JIC-VGI) and the Development Bank of Japan (DBJ). ADDX currently serves accredited corporate and individual investors in 27 countries, spanning Asia Pacific, Europe, and the Americas (excluding the US).