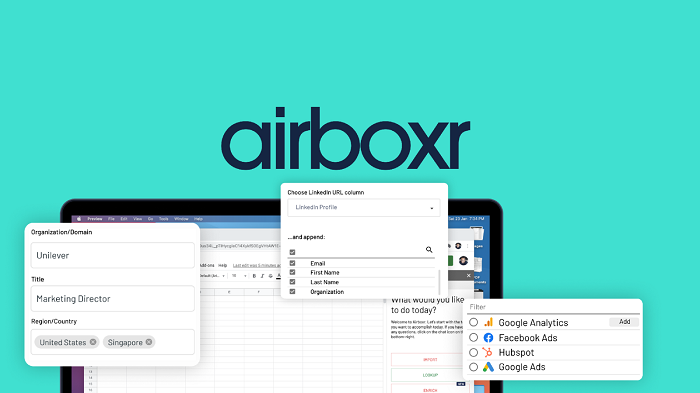 Two professionals who had struggled with data-driven decision making in the past met while they were under training at Entrepreneur First in Singapore. That’s when they decided to work on their ‘secret weapon’ for faster data analysis which they named Airboxr.

The two men are Saptarshi Nath and Shubham Kaushal. Saptarshi has worked as a management consultant and led his own venture called Overcart, both roles that required a lot of data analysis and number crunching. As a full stack engineer Shubham was involved with software developer Chaldal in its early stages, which inspired him to venture out on his own. Both of them were enterpreneurs-in-residence at EF when they met.

Fortunately, the two co-founders have both worked at companies that understood and valued the importance of data-driven decision making. They got the chance to implement sophisticated data infrastructures or databases for their teams. This is why they set out with the goal of enabling everyone, not just data scientists and developers, to be able to conduct their own data analysis and make business decisions independently.

During the development phase, they observed that data analysis using advanced database tools was owned by skilled developers and Business Intelligence teams. “Non-technical employees were still conducting their data analysis on spreadsheets, manually exporting and importing massive CSV files,” recalls Saptarshi, the CEO and co-founder of Airboxr. This, he adds, meant that they were struggling to reconcile different source formats for their data.

In most cases, however, the business-critical decisions were still being made by these non-technical employees. Other than their first-hand experiences and a hundred odd conversations on the topic, they also conducted a survey of a thousand spreadsheet users which provided them insights into what was needed to improve upon the existing data analysis tools.

“Today, business managers across all functions are expected to make data-driven decisions, but they may not always be technically equipped with the right tools to make those decisions quickly,” points Shubham. He adds that the established database management tools have a steep learning curve and are usually limited to Business Intelligence and Data teams.

Several other operations that depend on data like marketing, sales, finance, and operations tend to still be dependent on their spreadsheets. Members of these teams end up spending 80% of their analysis-time in collecting and cleaning the data, according to the company. They attribute this to the data being fragmented across multiple data sources (ad channels, CRM, accounting software etc.), each having its own data formatting standards.

“This leads to a lot of grunt work; users have to go from data source to data source, download multiple CSVs and clean them all up before even beginning to analyse their data. What’s worse is that by the time they get to the analysis, the data is already outdated,” shares Saptarshi. This realisation made their work simpler – streamlining decision-making for non-technical users by taking away the manual work of collecting, mining, and standardising data without worrying about data imports, syncs, or the technicalities of data management.

Airboxr allows users to import, analyse and enrich data within their spreadsheets without learning how to code. As it is compatible with Google Sheets, there is no learning curve involved. It also allows users to save their analysis, so the next time they want to run it on fresh data, they can do so with the click of a button.

Currently, it has users from over 50 countries around the world, 54% of whom have connected one or more data sources to conduct their last-mile analysis on spreadsheets. The app is especially popular amongst marketing and inside-sales professionals who tend to have to connect to a variety of sources like Facebook Ads, Google Ads, and HubSpot.

Users have expressed delight about the fact that users don’t need to learn new software or be technically inclined to use Airboxr. “Most experts we have spoken to have faced the challenges of data-driven decision-making personally. They also appreciate our world-view that in the future, every business should be able to make data-driven decisions without spending two months building their data infrastructure,” informs Shubham.

The initial plan of the team was to set up their office in a co-working space and work with South-East Asian companies. Covid-19 threw a spanner in the works, and the local circuit breaker in Singapore left them with no choice but to work remotely. However, the way things were during 2020 also gave them an opportunity to build for a global audience from day one.

“We started getting on Zoom calls with potential users from all over the world. It was the insights that we got on those calls that became the basis of our minimum viable product, which we quickly iterated into Airboxr as it is today,” shares Saptarshi.

The situation also allowed them to hire the best suited people from around the world. The company now is a five-member team working out of four different countries, which helps them in better serving the global business community. About this aspect of the business, Shubham says, “We still miss the in-person brainstorming sessions. Overall, the pandemic forced us to establish a future-proof, remote-first culture and we are excited for what lies ahead.”

The founders see Airboxr evolving into a Canva for data mining. Just like Canva made design accessible to users who don’t know Photoshop, Saptarshi explains, they want to enable users who don’t know SQL or advanced analysis techniques to become more proficient and efficient with data analysis. The long term plan, he says, is to become part of the default user journey when people open their spreadsheets, whether in the form of Google Sheet, Excel, or Airtable.

“When business users can shift their focus beyond the menial aspects of data analysis, they can spend more time actually interacting and asking the right questions with their data. This way the users will be empowered with meaningful insights to truly inform data-driven decision-making,” says Shubham explaining the core belief of the company.