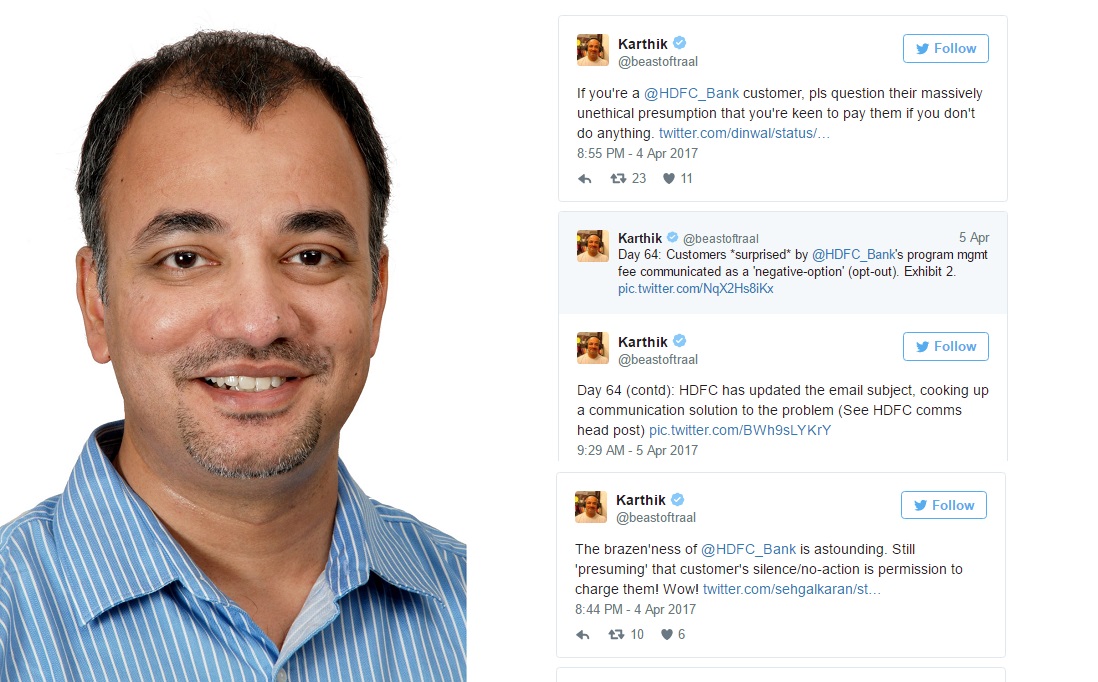 SINGAPORE, APRIL 11, 2017 – It started out as one man’s online protest against an opt-out service by a leading bank and this David v/s Goliath crusade is almost coming to resemble the Arab Spring.

Aptly labelled as the Twitter / Online Satyagraha (satyagraha meaning protest) by the media, the campaign being played out is driven by a Bengaluru-based professional against India’s largest private sector bank HDFC Bank.

Bengaluru-based Digital Marketer, Karthik Srinivasan, was unhappy that HDFC Bank was charging what he thought was a hidden fee through its emails. HDFC Bank had been sending its users an email welcoming them into its virtual relationship manager program, which was supposed to give them additional benefits. The program was to cost Rs. 400 per year (S$ 7.5), but HDFC only mentioned this in the fine print at the bottom of the email. Worse, the company signed up users by default, and asked those who didn’t want to join to manually opt-out through a small link at the bottom.

Karthik felt that people who didn’t open the mail – or missed the fineprint at the bottom – would have been signed on to a program that they didn’t want, and for which they didn’t agree to pay for. He contacted HDFC about this, but the bank maintained that it had been “fair and transparent” by providing an opt-out facility, which was in compliance with regulatory requirements. That’s when Srinivasan, on 1st February, resolved to tweet about the issue “every single day till the end of 2017” until HDFC Bank apologized.

While Karthik himself has not been impacted as he’d noticed the opt-out link at the bottom and had chosen to use it, the internet activism has been gathering a lot of steam. He’s big on Twitter, and has over 25,000 followers. He stayed true to his word, and has been tweeting every single day about the issue.

The Indian mainstream media too has started taking notice of his campaign. While Karthik still waits for the elusive apology from HDFC Bank and continues his Tweet-a-day campaign, it is definitely worth watching if this turns out to be as effective as the Arab Spring.