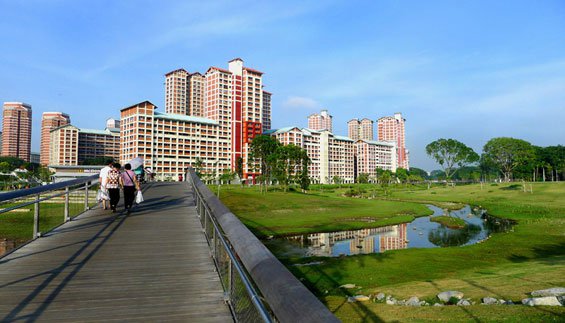 It is now a disused rubber factory converted into a warehouse. But Kallang Distripark along Geylang Bahru Road could in years be teeming with activities, with sportsmen kayaking in the nearby Kallang River and residents cycling along park connectors. (Straits Times News)

The 15-ha private industrial estate has been identified as a potential site, among several others, that can be redeveloped as part of the Urban Redevelopment Authority’s (URA) ambitious plan to turn the areas along Kallang River into a lifestyle hub.

URA’s ideas for the areas around the 10km-long river are on display at the URA Centre at Maxwell Road, in the A River Runs Through It exhibition, which was launched by Minister for National Development Lawrence Wong on Wednesday (March 29). The agency hopes to get feedback on its ideas from the public.

Consultations with the public and private sectors, such as architects and landowners, will continue till the end of the year, and more details on URA’s plans can be expected next year. The budget for the project has not been finalised.

Mr Wong said that during period of rapid industrialisation, urban rivers like the Kallang River were often abused and undervalued. Now though, they are seen as cultural and recreational assets in cities around the world, and used as catalysts to create new recreational spaces, community nodes and beautiful promenades.

The Kallang River is the longest natural river in Singapore, three times the length of the Singapore River. It provides a host of opportunities, he added.

Today, the path along the river is fragmented by expressways and industrial estates, hence it is the Government’s goal to redevelop certain plots of land and put in place new infrastructure, so that it will one day be possible for residents to walk, jog or cycle from Lower Peirce Reservoir, where the river originates, to Gardens by the Bay and the Central Business District (CBD).

Among URA’s suggestions is to build a cycling bridge that goes over and across the Pan Island Expressway (PIE), which would make it more convenient for cyclists and joggers to cross the PIE. They currently have to use a pedestrian overhead bridge.

URA also hopes to build underpasses across Kallang Bahru Road and Upper Boon Keng Road, so that people using the park connector through those roads will not need to use a traffic crossing. Another goal is to turn Kallang Industrial Estate into a mixed-use precinct equipped with a pedestrian and cycling network.

Plans announced earlier this month to turn Kampong Bugis – a 17.4 ha site bounded by Kallang Road, Kallang River and Crawford Street – into a car-lite residential precinct, with a network of walkways and cycling paths, is also part of the Kallang River rejuvenation project.

About 800,000 people live within 2km of the Kallang River, and the URA believes there is potential to inject another 100,000 dwelling units into the area in the next 20 years. Mr Wong, who is also Second Minister for Finance, said that the various possibilities are not final. “We want to hear from Singaporeans, and co-create a future Singapore that meets our shared aspirations,” he added. A River Runs Through It will run from Wednesday (March 29) to May 2, from 9am to 6pm on weekdays.

The news was first published on Straits Times, Singapore. Click here for the source.