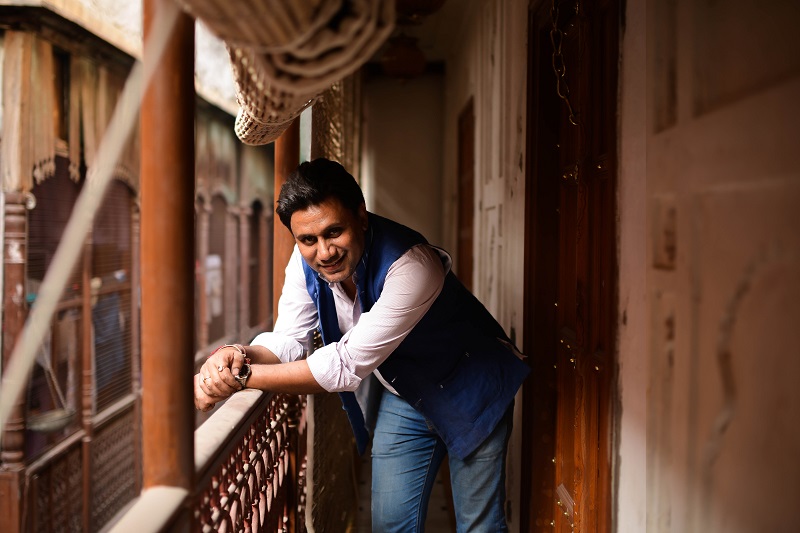 Kapil has been in practice 1999, over 17 years now. He has an inclination for fine arts since childhood and architecture was a natural choice. He considers himself an artist turned into an architect, and considers his project an extension of his art form, his renovated house a reflection of his self where each space has been considered as a canvas frame.

Kapil has won over 32 International and National awards in last few years, with Asharshila Vatika School being featured in Atlas of World Architecture among few selected works from India, also the project has won Design Share Awards 2008, on awarded for innovative learning Environment, only Asian firm to win in this category. Sachdeva Farmhouse being winning entry in the World Architecture Community 18th cycle, becoming the only Indian project to be selected in voting by honorary judges. Architect’s own Office was a finalist in the World Inside Festival 2014 in office category and Spaces Architects@ka was selected in Architectural Digest – AD50, 50 Most influential names in Architecture and Design for 2015.

He has been working on projects carrying from furniture designing to corporate building schools, residence, restoration projects. His interest has been to create and explore new styles and design, experiment with space design and its relations to the surrounding and inhabitants.

Kapil shares some interesting insights from his journey with team ABT.

Who is your greatest inspiration and why?
Since my college days I was inspired a lot by Charles Correa for the way he perceived spaces and his architectural thoughts with former years fascinated by Coop Himmelblau and Zaha Hadid with the way one can design buildings in different dimensions yet keeping the core of architectural space intact for humans to respond, that is what keeps me going.

Tell us more about how did Space Architects@ka happen and its reach so far.
Space Architects@ka started in 2012, previously it was Spaces Architects which started  in 1999. Our first project was designing a chair and I have come a long way with completing more than 200 projects from design products, offices , schools, conservation , residences to apartment buildings. The firm has won 37 international and national awards apart from more than 200 features over the globe  in various journals & magazines. The firm has been shortlisted twice in world Architecture Festival in 2014 & 2016. Also the projects has been featured in Atlas of world Architecture, Global best interiors, The Modern homes, contemporary house apart from others.

What’s your design philosophy?
The word ‘SPACES’ is a very integral part of our being, we move through spaces, we identify with it, our senses response to spaces and of course, we feel it. We work to develop the space for our clients where they emotionally get attached to it; it is not an empty sterile container but a sensual dynamic environment. Our spaces are not formulaic but are derived on the basic requirement of client and site. We believe a building is a living object which can communicate; it is just that feeling that has to reciprocate in a very sensitive approach towards our work.

We believe that design should be enduring and not follow the fashion of the day. Our works are modern with consideration to the culture, technology and society that we live in. It seeks to attain a timeless, classic beauty.

Tell us about hall mark project undertaken by you?
Haveli Dharampura is a project which is first of its kind, adaptive reuse where a 135 year old haveli has been restored and rehabilitated into a heritage hotel and a cultural center.

Tell us about any one milestone that you are proud of
Very proud of this conservation project  – Haveli Dharampura , a different project from all of the other projects. The impact and reach it has achieved among people in India and abroad is outstanding and sharing the stage with vice president , Lok  Sabha  speaker apart from other eminent delegates in the opening ceremony of the project is truly a remarkable and unforgettable experience for me.

Did you face any challenges, how did you overcome them?
The practice has been full of challenges in convincing  people about our thoughts, creating awareness about space quality. I think now we have a better convincing  power but still struggle with apprehension from client for experimentation.

If you could do one thing differently, what would that be?
I think more awareness among people about the architecture and space design is much needed. Also change in our government polices of appreciating the architects work will eventually inspire all of us to evolve and grow.

What would you like to achieve in the next 3 years?
We would like to create fusion of modem and deconstructed architecture for big  scale project in next 3years.