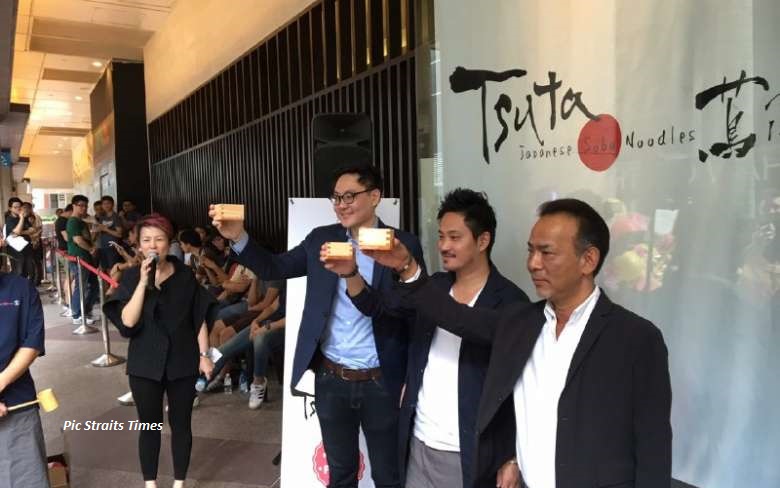 The lure of slurping down a bowl of noodles from the world’s only Michelin-starred ramen restaurant, Tsuta, was so strong that even stop- over tourists were drawn to its first overseas outlet in Singapore, which opened on the ground floor of Pacific Plaza yesterday. One of them was Indonesian businessman Mr Sugirato Alim, 35, who squeezed in a trip to the 18-seater eatery with his wife, Ms Yenita Jayanata, 32, during their nine-hour stopover here from Italy to Indonesia. With two suitcases in tow, they waited for about two hours for their bowls of shoyu ramen. (AsiaOne)

Mr Sugirato said: “It was well worth the risk (of missing our flight) as everything in the ramen bowl, from the broth, egg to the noodles, came together really well. I will visit the restaurant whenever I am in Singapore.”

He was one of around 250 people who waited for more than an hour for Tsuta’s signature shio and shoyu ramen. At its peak at 11am, the queue swelled to about 175 people and extended to three rows, packing the side corridor of the 1,000 sq ft restaurant.

The snaking queue was neat and organised, with staff directing diners to the starting point of the queue and distributing menus and bottles of water. Tsuta stopped accepting new customers at 5pm, an hour ahead of closing time. Most of the diners whom The Straits Times spoke to gave the thumbs-up to the ramen, saying that it was well worth the wait. Read full news