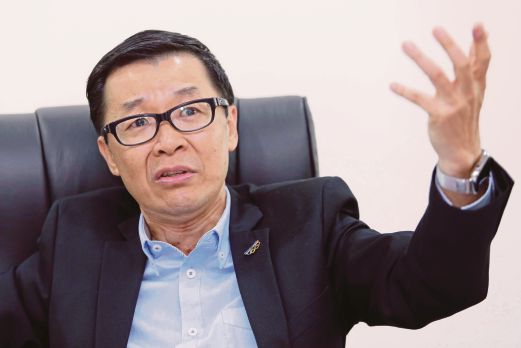 Panasonic has big plans for Malaysia in the next five years, expanding its focus from its current popular business-to-consumer (B2C) model to move in a bigger way towards the business-to-business (B2B) model. (NST.com)

Panasonic Malaysia Sdn Bhd managing director Cheng Chee Chung said the company envisions itself to be more involved with offices, hotels and banks, among others, becoming a strong consumer company and a major player in B2B.

“Panasonic wants to be involved in people’s lives no matter where, either at home or at work. “This is how we envision Panasonic in five years’ time. The B2B segment now contributes less than 10 per cent to the company’s revenue and we aim to grow it to 20 per cent in 2018,” he told the New Straits Times in an interview recently. Cheng said currently, Panasonic being a single brand has the widest range of products for consumer electronics, ranging from major home appliances like refrigerators, washing machines, televisions and air conditioners. It also makes cooking products like microwaves, rice cookers, blenders, coffee makers to beauty product like hair dryers, facial steamers and shavers.

Apart from that, the company also offers office equipment products like projectors, CCTVs and PBX (office communication systems). “(So), when you look at our competitors in the market, none (of them) have such a wide coverage (of offerings). “With our wide coverage, in total, we have more than 90 categories of products, and in terms of number of models, we are handling (on a daily basis) 1,900 models,” said Cheng, who is often referred to by his friends as “half-Japanese” after having worked for Panasonic for 27 years.

Cheng said while Panasonic is best known for its consumer electronics products, the company has long provided both public and private enterprises with technologies and solutions which enhanced the experiences of their customers. He said the company has identified the country as its key market and new growth area to further boost overall sales. This, he said, will be driven by the company’s existing strength in the consumer products market as well as its current focus on the B2B model. Cheng, who has been at the helm of Panasonic Malaysia since April 1 last year, said the company, which is strong in the consumer products market, is now focusing on the enterprise segment, or B2B. “To further grow our sales, we are now looking beyond B2C. We are going to B2B and are expanding into (that area). “We are not giving up on our B2C business. We are actually (still) doing (it), but not shifting a lot of resources into the segment.

“If we still put at the B2C, I think we cannot sustain our business,” said Cheng, who hails from Kuala Lumpur. Cheng, who was previously deputy managing director at Panasonic Malaysia, said the company is also working with developers in terms of integrated development. Cheng, who joined Matsushita Industrial Corp Sdn Bhd (now known as Papasemy) in November 1989, said the air conditioner business will remain Panasonic’s key driver for growth, which contributes about 30 per cent to the company’s total sales, followed by the TV segment. Moving forward, Cheng said Panasonic is looking to tie up with more property players and offer them the company’s products. Established 40 years ago, Panasonic has been growing steadily, with turnover increasing to RM1.65 billion last year from RM46 million in 1976. The firm started with only 200 staff, which has now doubled to over 400 nationwide.