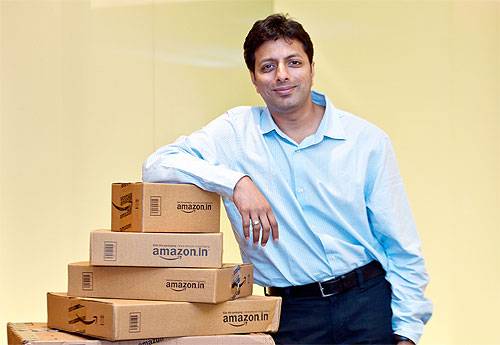 Amazon was India’s second ­largest online marketplace by shipments last month, industry estimates show, as it dislodged Snapdeal to become the only major player to increase share from a year ago. (ET Bureau- EconomicTimes)

Market leader Flipkart’s share of shipments fell to 37% in March from 43% in the same month in 2015, and Snapdeal’s fell to 14­ 15% from 19%, show estimates by an investor tracking the logistics market and the chief executive officer of a logistics company that handles shipments for online retailers. Amazon India’s unit market share surged to an estimated 21­24% from 14%. Although the data are snapshots of shipments a year apart, they definitely point to a drop in the volume market share for the India­based companies. Other industry experts and analysts corroborated the numbers. They said the data were evidence of the larger unit market share trend in India’s ecommerce industry, although at least one recent estimate pegs Flipkart and Snapdeal ahead of Amazon India by sales.

“Amazon is very rapidly taking market share from companies like Snapdeal and other smaller players. If there is no new entry, it will be a two­horse race (between Flipkart and Amazon) by the end of the year,” said Satish Meena, a senior analyst with Forrester Research. “If Flipkart is not able to get its act together in the next 6­12 months, Amazon can overtake Flipkart also.” Morgan Stanley estimates that India’s online retail market, including delivery of food and grocery, will be worth $119 billion by 2020 from $16 billion in 2015. Flipkart said in June 2015 that it was aiming to sell goods worth up to $12 billion in a yearÍ¾ Snapdeal had claimed it would do better than FlipkartÍ¾ and Amazon has not disclosed a sales target.

If Amazon is gaining market share, it will be another instance of a multinational internet company showing signs that it can become the dominant player in India. In the ridehailing business, San Francisco­based Uber says it is catching up fast with market leader Ola, which in turn contests the claim. Online retailers shipped 8­9 lakh products a day in March this year, with Flipkart, Amazon and Snapdeal accounting for about three­fourths of the shipments, the estimates show. ShopClues and Paytm rank next.

The gains by Seattle­based Amazon, which launched in India a little less than three years ago, follow aggressive investing in its local unit – CEO Jeff Bezos has so far committed to pump in at least $2 billion in India. Flipkart and Snapdeal, meanwhile, are forced to trim expenses and wean customers away from heavy discounts as they struggle to raise money from investors at present valuations. A new element has been introduced to the equation by the government’s ‘guidelines’ earlier this month on ecommerce marketplaces. One of the main requirements is that no seller can account for more than a quarter of sales on a marketplace, and this could affect each company differently ­ Amazon and Flipkart have greater reliance on large sellers but not Snapdeal.

Amazon has infused at least Rs 6,700 crore since January 2015 into its India unit, Amazon Seller Services, with over half of that amount being invested since December. The company has channeled a lot of that money into improving the shopping experience for customers in terms of delivery and aftersales service, say investors and analysts. Amazon is also expected to introduce its successful Prime subscription programme in India. “In 2015, we grew by more than 250% over 2014,” a spokeswoman for Amazon India said in an email. “We are on a momentum to deliver similar levels of growth this year but on a much larger base.