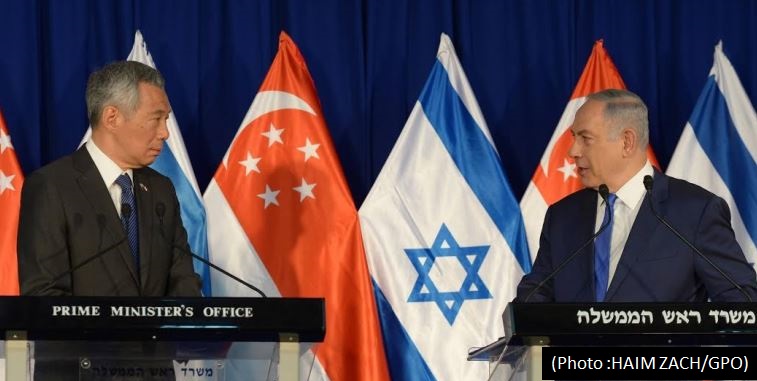 Under the deal, signed at the university in Jerusalem and witnessed by Singapore Prime Minister Lee Hsien Loong, a research and innovation centre will be set up in the city-state. The Singapore-Hebrew University Alliance for Research and Enterprise (SHARE) will advance and strengthen research collaborations between the countries, and serve as a hub for research, scholarship, entrepreneurship, and postgraduate and postdoctoral training.

Agreements were also signed on Monday between Hebrew University and the National University of Singapore and Nanyang Technological University to deepen research collaboration.

PM Lee, who is on the second leg of a week-long visit to the Middle East, was conferred an honorary doctorate by Hebrew University on Monday in recognition of his longstanding leadership, economic and civil reform, and in appreciation of the longstanding friendship between Israel and Singapore.

Speaking at the university, Mr Lee noted that Singapore’s first batch of officer cadets was trained by the Israeli Defense Forces. He recalled how Israel had helped develop the Singapore Armed Forces shortly after Singapore’s independence in 1965. “We asked a number of countries, but only Israel responded, and it did so very promptly,” said Mr Lee. “We called them ‘Mexicans’ for operational security and because we hoped that their swarthy looks might make the cover plausible. We will always be grateful that Israel helped us and stood by us at a time of great need.”

Over the years, Singapore-Israeli ties have advanced beyond defence and security, for instance in technology research, student exchanges and in exploring business deals on both sides. The Singapore-Israel Industrial Research & Development Foundation has provided US$170 million in funding for about 150 projects since 1997.

SINGAPORE, ISRAEL HAVE ‘MANY SIMILARITIES’

Touching on his award, Mr Lee said he was honoured that it comes from a renowned university with outstanding strengths in research and innovation. Hebrew University has produced eight Nobel Prize winners, Israeli presidents and prime ministers, as well as leaders in every field, he said.

Mr Lee also spoke on physicist Albert Einstein’s visit to Singapore in 1922. He met the Jewish community in Singapore to urge them to donate towards the setting up of Hebrew University. The community raised about £750 — equivalent to about US$300,000 today.

“Today Singapore is home to a small Jewish community, numbering a few hundred which has contributed to our society out of proportion to its numbers,” said Mr Lee. “In recent decades, many more Jewish expatriates, including Israelis, have come to live and work in Singapore – enough to sustain a successful kosher restaurant.”

Mr Lee said Singapore and Israel have many similarities. Both are young nations and had to integrate diverse groups to create a common sense of nationhood. But he noted their differences too. “Israel has had to fight several wars to defend its right to exist,” said Mr Lee. “Singapore has been fortunate never to have been at war with its neighbours, with the exception of the 1960s when we had to defend ourselves against Konfrontasi, a low-intensity conflict launched by Indonesia against Malaysia, at a time when we were inside Malaysia.” But Mr Lee said, despite the differences, Israel’s story is one that resonates with Singaporeans and is a powerful inspiration to Singapore.

PM Lee, who is due to visit the Palestinian National Authority in Ramallah, said he hopes to “signal Singapore’s friendship” with both Israel and the Palestinians. He added that he hopes to better understand developments, including the Middle East Peace Process, and to express Singapore’s hope that both sides will take steps to resume direct talks and work towards a “just and lasting two-state solution”.