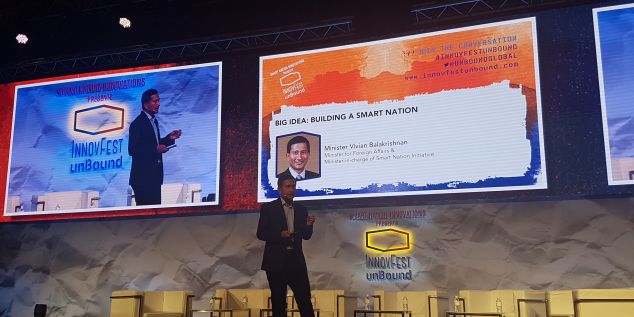 Singapore plans to build an operating system that can handle over 100m smart objects within the next five years, part of plans by the country to become a testing ground for tech and innovation, reported www.thedrum.com

The figures were discussed by Singapore Minister for Foreign Affairs Vivian Balakrishnan at InnovFest UnBound in Singapore today (Tuesday 17 May). He used his presentation to discuss how Singapore plans to future-proof itself during what he calls a “technology revolution”. He used the concept of the revolution to explain why many countries are experiencing unrest in terms of jobs for the young or financial slowdowns.

“The world is going through a tough time, there is a lack of opportunity, an anxiety about fairness and the real diagnosis for this is that we are living in a digital revolution. It is a huge opportunity to people who get it and understand it. We want to create most conducive environment for people who get it to be able to build it. I want people to come to Singapore and when they leave to say ‘I have seen the future and it works’”, said Balakrishnan.

With just 5m people and being based off one small island, Balakrishnan believes that by investing in becoming a smart country, Singapore can become a testing ground for the future and cement itself as a global powerhouse. A part of this is the operating system that the government is building to be able to link up 100m smart devices; meaning phones, traffic lights, cameras and sensors throughout the country. Balakrishnan said the system should be open source and would mean people could develop apps on top of the system.

“Ultimately, it’s creating a system to analyse and create actionable insights and applications. It’s a big enough number to provide the scale but we are a small place called Singapore. I am hoping it will be an open platform which creates a huge range of opportunity for app developers to leverage off it and that is a worthwhile challenge. The thing we can do, as a single layer and being a small compact island is roll it out quickly and we can test it,” he said. The three pieces of technology that Balakrishnan highlighted to prove this revolution was artificial intelligence, robotics and virtual reality.

From a governmental point of view, Balakrishnan said that a big challenge would be working on new frameworks for regulation because currently it’s what slows a lot of growth down and can potentially stifle innovation.