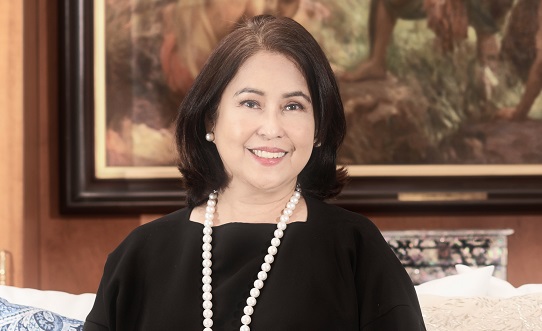 MANILA – As a young girl in the Philippines, Nina Aguas says her dreams, though they were in 4D, didn’t have a gender. Despite being in male dominated fields like accounting, banking and insurance, she rose to several leadership roles, often the first woman to hold them. She is grateful that her parents, both of whom were teachers, gave her and her six siblings a perspective way beyond the boundaries of the small town they lived in.

Currently, Aguas is an executive chairperson for Insular Life Assurance. She is also a board member with several organisations like Philippine Life Insurance Association, Shells Philippines, Union Bank of Philippines, as well as World Bank’s Advisory council for gender and development. She talks about what drives her and maintaining gender balance at the workplace among other things in this chat with AsiaBizToday.

Her parents were the biggest influence in the life of Nina Aguas, devout teachers who ensured that all seven of their children went to private catholic schools. “To them, education was the one big thing we all must have. I went to an all girls catholic school where the strict disciplinarian German nuns raised us to work hard, to take responsibility, be academically strong, spiritual, generous and kind,” she recalls.

The first job that Aguas held was as a CPA in the country’s biggest accounting firm. At the time, the firm would follow an unwritten rule of keeping the gender ratio of their employees at at least 70:30. After spending a few years there, she moved to a career in banking, an industry that she says she has always been attracted to.

“Again, the industry was male dominated as far as leadership roles were concerned. My quick rise in terms of rank was because I had bosses who were supportive and open minded,” says Aguas about her impressive career trajectory. The breakthrough came when I was appointed the Asia Head for Audit in the bank, the only female to hold the role globally. All her other competitors for the position were men.

Overall, she spent over 30 years working for multinational institutions in the country and many parts of the world, leading a diverse group of people. Ask her what she attributes this success to, and she says, “I have always marched to the beat of my own drum. As in a race, I avoid looking sideways and back, as no one person is the same. I never saw my being a woman as a barrier; it was, in fact, a gift.”

Getting into roles of influence illuminates one’s leadership abilities, confidence and can be a promoter of talent for both women and men, says Aguas, when asked if individual achievements like hers can help other women. The leader becomes an inspiration, an idea, a dream, and a possibility for other people, she adds.

But, are workplaces ready for more women leaders? “Diversity needs to be formally inducted into our institutions’ agenda, recognizing the intrinsic value of having different perspectives and disposition brought into the boardroom and senior leadership tables,” believes Aguas. She has actually ensured to increase the Diversity scores of the organisations she was leading on two counts, gender and ethnicity – female and Asian. In fact, she says, she has worked in diversity so much that she has become gender and race blind.

“I apply the same discipline and focus, create the same passion and excitement, the same judgment and common sense in the roles I took on as the men before me did. In Insular Life, we promote a gender-neutral culture. It is about putting on deck the best person for the job. It is not about being male or female or anything in between. It is about the right matching of skills, experience, temperament, and who can lead the team to its highest performance,” explains Aguas. No wonder then that among the company’s middle management, the ratio of male to female is almost 50:50. For upper and top management women comprise 64 percent.

She opines that the traditional beliefs about gender roles that some Asian countries continue to practice are the biggest hindrance for women as well as men, to live a fuller life, not just in their careers. “Men are also losing out on opportunities to be the other half in rearing and guiding their children, a responsibility usually assigned to women. All this, because men have been stereotyped by their culture to be the providers and not nurturers of the family,” she says. For societies with a more open culture, sometimes the hindrance can be found within the women themselves, unable to break free from the conventional roles, she adds.

Aguas asserts that, contrary to the prevalent collective thought that women are lacking is incorrect. Quoting poetess Rupi Kaur, she speaks of women’s abilities thus: “… since day one, she already has everything she needs within herself. It is the world that convinced her she did not.” She tells all the women around her to take courage. “Speak your intelligent mind, create and add value so you get an invitation to the table. Show your brilliance with your arguments without having to put all your emotions into it. Decision makers will recognize a great idea when it is coherent, rational, and strategic,” she tells them.

She feels a strong sense of achievement when she impacts someone else’s life positively. In her personal life, it is comes in on seeing her children grow up as good human beings, confident, wise, and taking on responsibilities of their own. She takes pride in seeing her former team members taking up leadership roles themselves, especially when they say how much she influenced their choices. She takes joy when she sees her team getting stronger because of her leadership. She loves the feeling of improving communities through her personal involvement and commitment.

Looking at the number of organisations and activities that she partakes in, one wonders how Aguas keeps a work-life balance at all. “I follow a simple rule – when at work, I do not worry about personal matters and when at home, I do not worry about work. Work-life balance is possible, just not everyday. It’s about the choices and priorities one makes in a given moment,” she says.

The work from home arrangement over the past year has also helped her achieve a better rhythm in her daily routine. “It slowed me down and allowed me to breathe deeply given that there was no pressure to be at a given place. The confinement, while limiting, also expanded the time I gave my family,” she says. This was also the time in which she spent more time in her house than she has in seventeen years of living there.

Other than bringing peace in people’s personal lives, Agua believes the Covid-19 pandemic and its economic repercussions would act as not just the greatest disruptor but also the greatest accelerator to  digital transformation. “The fourth industrial revolution brought in disruptive technologies and trends such as Internet of things (IoT), robotics, virtual reality (VR) and artificial intelligence which are changing the way we live and work. We are moving into more exciting times as the convergence of technology and humans is quickly moving us into the era of artificial intelligence5 (5th revolution),” she feels.

She likens technology to Aladdin’s magic lamp which allows us to see a whole new world. Aguas says she feels excited about this new world of endless possibilities and opportunities in almost lightning speed. She feels especially enthused when she sees the new generation raring to go and partake of such opportunities.

“Be strong and courageous, resilient and agile, focused and diligent,” she advises these aspiring youngsters. She goes on to add, “Learning is constant. Develop yourself to be the best person you can be. Most important of all, develop a strong work ethic – to always endeavor to do the right thing. Do not neuter your imagination, do not edit your ambitions.”

This interview was first published in the Women Icons Network.