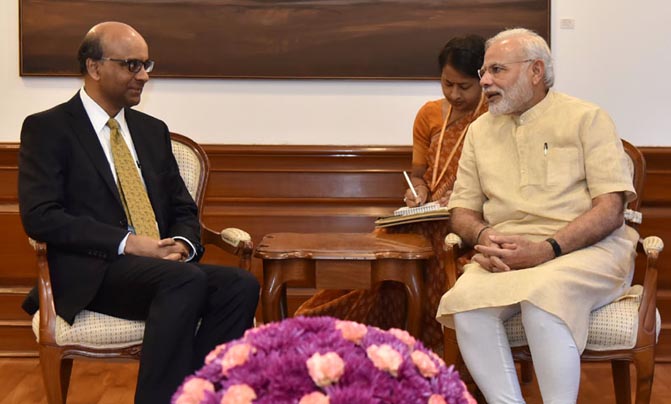 Shanmugaratnam has been invited to New Delhi to address top policy-makers on “Fulfilling India’s Potential in the Global Economy” during the inauguration of NITI Aayog’s maiden annual lecture on Transforming India. Indian Prime Minister Modi will on Friday inaugurate the event which will be attended by nearly 1,400 delegates, including Union Ministers, Chief Ministers and senior officers.  A panel discussion and brainstorming session are also part of the event where ministers and officers will exchange ideas on economy, governance and development with Shanmugratnam.   The annual lecture series on Transforming India was proposed by Prime Minister Modi to bring in international personalities to share their experiences and ideas on India.

Modi had visited Singapore earlier in 2015 to attend the State Funeral of Lee Kuan Yew on 29 March. His participation in the funeral along with the declaration of the funeral day as a day of mourning in India was deeply appreciated by the Singapore Government. Singapore President Tony Tan Keng Yam also undertook a state visit to India in February 2015 on the occasion of the 50th anniversary of the establishment of diplomatic relations.

Recent visits from India to Singapore also include Defence Minister Manohar Parrikar’s visit in June 2016 for the inaugural Defence Ministers’ Dialogue and the Shangri-La Dialogue; Minister of State(IC) for Power, Coal & NRE Piyush Goyal’s visit in May 2016; Chief Minister of Madhya Pradesh Shivraj Singh Chouhan’s visit in January 2016; Minister of Railways Suresh Prabhu in October 2015 to participate as a key speaker at the Infrastructure Finance Summit 2015 and many other such prominent visits.

On the other hand many dignitaries from Singapore have visited India including Singapore’s Deputy Prime Minister and Coordinating Minister for Economic and Social Policies, Tharman Shanmugaratnam to attend the Growth Net Summit in Delhi in April 2016, Minister for Home Affairs and Minister for Law, K Shanmugam in November 2015 leading a business delegation to the Resurgent Rajasthan Partnership Summit in Jaipur , Senior Minister of State, Prime Minister’s Office, Ministry of Foreign Affairs and Ministry of Transport Josephine Teo in October 2015 to attend the Third India Africa Forum Summit (IAFS) and many other such visits.