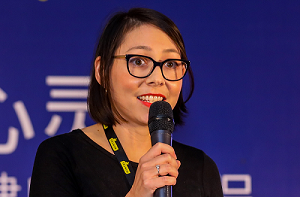 There was no dearth of a female role model in the life of Lee Ann Thevenet while growing up in New Zealand. No wonder then, that she thought she could be anything she desired – from a film director to a fashion designer to a forensic scientist. She is currently the country manager for Australia and New Zealand at multinational market research firm Mintel.

Her aspirations, however, were different from most people’s. She aspired to be able to live abroad and travel the world, meet and engage with new cultures, have a family of her own one day and most importantly, be happy while doing so. In this chat with AsiaBizToday, Thevenet talks about gender issues at the workplace and the unintentionally high mental load on women in the domestic sphere.

Right from the first job she held after graduation at a government Ministry office, Lee Ann Thevenet has been around inspirational female leaders. “At that time, our Department Head was female and women outnumbered men in managerial roles. This was refreshing, especially as it was an IT department which generally has a stereotype of being male-dominated associated with it,” she remembers.

Thevenet feels lucky to be surrounded by a progressive people, in terms of their thoughts on gender equality. “New Zealand has forged the way when it comes to gender equality; we are proudly the first nation in the world to have granted women the right to vote. Our current Prime Minister is one of the youngest female world leaders, who also gave birth and became a new mum whilst holding office,” she proudly rattles on.

This, and the fact that the first company she joined had many senior female leaders, meant she grew up in an environment where she was shown that having a career and being a mother were not mutually exclusive achievements for women. However, she is aware that this kind of work environment is not necessarily accessible to people around the globe.

The mother of a young daughter, Thevenet has a lot of domestic responsibilities as well like most working mothers. Living in today’s times, fortunately, means that the male partners are involved more than ever before when it comes to sharing responsibilities revolving around the household duties and child rearing.

“However beyond the general physical tasks, there is a form of invisible labour that exists with managing a household that silently falls on women’s shoulders as an unspoken expectation. Simple, yet important, things like making sure the detergent doesn’t run out, that there are always clean towels available around the house, arranging playdates, kids’ vaccination appointments etc,” she points out.

It’s important, she believes, for workplaces to recognise this. Even with partners who are extremely supportive and take on their share of domestic chores, this ‘cognitive labour’ that exists in managing a household and family still burdens the modern-day women, she says. “Women are still burdened which can leave us feeling zapped of all energy. The link between ‘mental load‘ and a falling work performance are established pretty well,” opines Thevenet.

“Things differ from industry to industry and from country to country. However, there has definitely been a lot more light shone on gender issues inside the workplace globally. Many corporations are making big steps towards achieving gender equality such as streamlining paternal and maternal leave, transparency in pay gaps, and supporting flexible working arrangements among others,” said Thevenet.

She added that although the number of women in leadership positions is still few, this number is steadily increasing over time which proves the positive impact of these initiatives. “I have been lucky to have always had strong supportive managers at Mintel who have championed for me and encouraged me at each step of my career. This is a testament to our corporate culture, and as an organisation,” she says when asked if such initiatives are undertaken at her company.

She adds that the company seeks and values a diverse talent pool and the unique perspectives it brings to the table. “We recently started an Employee Resource Group program. These are employee-led groups, formed around a common interest, affinity or background. They provide support and contribute to personal, professional and organizational development, as well as promote diversity, openness, understanding and inclusiveness,” Thevenet informs.

Just like a workplace is expected to maintain the gender equilibrium, every individual has the responsibility to maintain a work-life balance. Agreeing with this sentiment, Thevenet says, “In order to reach peak productivity and performance, as well as maintain lower levels of stress, the most critical task for me is to identify my priorities apart from work and set time for them.”

The priorities, for her, include her family, and my health and wellness. “Based on this, I work to structure my calendar to ensure that I am as efficient and productive as possible during my working hours. This allows me to be fully present with my husband and daughter in the evenings and weekends,” she shares her balancing formula. Structuring her calendar in advance also means that she can ensure to dedicate time to activities that contribute to her physical and mental well-being.

Thevenet also makes sure not to put too much pressure on herself to excel at any of the roles. “I always remind myself to never sweat the small stuff and let go of the notion of achieving perfection. Maintaining work-life balance, to me, means that when I am with my family, work cannot be on my mind or it defeats the purpose of family time. And lastly, never check emails right before you go to sleep!,” she explains how she manages to attend to both domestic and official responsibilities wholeheartedly.

While she may have several feats to choose as her crowning glory, she believes motherhood to be her biggest achievement. “The next big achievement would be surviving the rollercoaster ride of life as a new mum whilst simultaneously reaching new milestones in my career. And, the ride is far from over. Each day brings new challenges and learnings both professionally and personally,” she said.

For anyone looking to become a successful professional, Thevenet has simple advice – Always back yourself, work hard and go for what you want. “Make sure you are enjoying what you’re doing and having fun along the way. And, no matter what level you’re at in your career, always lead with kindness and compassion.”

Japan Government-Backed Investors Agree To Invest In iSTOX, Bringing Series A Total To US$50 Million