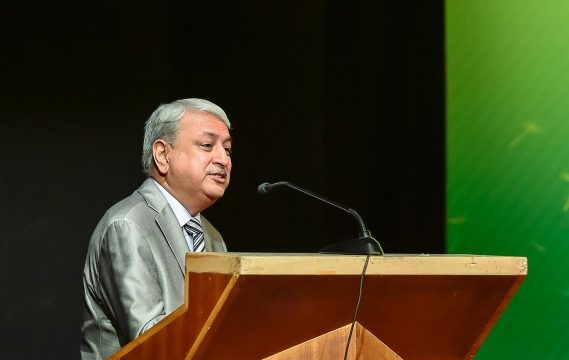 With over 35 years of distinguished professional experience in diverse roles as life scientist, administrator, peace activist, futurist, social entrepreneur and educationist, Dr. Anoop Swarup is also the Presidential Awardee of Republic of India in 2003. He was appointed as United Nations Representative with the UNSC at New York by UN Secretary General Ban Ki Moon in 2007.

Dr. Swarup has worked in senior positions with the Government of India including Director and Commissioner from 1981 to 2007. An alumnus of Universities in India and abroad, he holds a Doctorate in Bioscience and three distinguished Masters in diverse fields and an MBA having secured first positions and University Gold Medals.

He founded the  Sambhav Trust for de addiction in 2008, Sambhavami not for profit society to promote micro enterprises in1992 and conceptualized the ‘National Reconstruction Core’, ‘UNDP-NYKS Poverty Alleviation Awards ’ and the ‘Millennium Youth Parliament’ in 2000 that was presided by the Prime Minister, initiated a  ‘National Think Tank’ in Union Ministry in 2004. He is founder Trustee of ‘Indian Council of Gandhian Studies’ (ICGS), Fellow of Zoological Society of India, World Business Institute, Life Member of ‘Indian Institute of Public Administration’ (IIPA), ‘All India Management Association’ (AIMA), ‘International Institute for Strategic Studies’ (IISS), and on Global Advisory Board of Human Dignity and Humiliation Studies and Orgdyne, USA and Governing Council, ‘Centre for Global Non Killing’ (CGNK) Hawaii.

Here are some more excerpts from the interaction with Team ABT.

What led you to choose Education as a profession?
I did venture into a career in science as a research fellow early in my career before stepping into Insurance and the Civil Service. However, the real inspiration for adopting education as a lifelong choice had more to do with my own lineage and upbringing. It has been my firm belief that it is education alone that will provide a lasting solution to our problems as a country and the entire world be it non-killing peace or poverty. No wonder that even at the peak of my career in the Government, I took voluntary retirement in my own modest attempt to bring about a change in our values and through creativity and innovation by opting for education with fervent passion and hope.

My mother, Late Dr Savitri Swarup, one of the first women doctorates in India was a pioneering writer critic of Hindi literature. She was deeply religious and saintly, and had a profound influence on me as she instilled in me conscientious values of virtue and valor through epic tales and folklore.

My father Late Dr. Har Swarup, a scientist at Oxford University in the 50s and later himself a Vice Chancellor who returned back to pioneer the development of science and technology and setting up of Universities in post independent India. He is acclaimed to be the first to introduce cloning and polyploidy as early as 1956 along with Dr. J Gurdon who was later awarded with the Noble Prize in Medicine and Physiology. It was his passion for human progress and development through higher education and research that he foresaw the emancipation of our country. He inspired scores of young scientists and teachers throughout the length and breadth of the country and abroad that it is in his honor that the Indian National Science Academy (INSA) holds an Annual Endowment Award and Lecture.

Tell us about your initiatives at Jagran Lake City University, Bhopal.
We at ‘Jagran’ believe that ‘knowledge is the ultimate purifier for the whole world’. We have ensured that the best practice being followed internationally in the top ranked Universities is brought to our doorstep. Also we promote interdisciplinary studies and a multidisciplinary approach through mentoring and team building activities both for curricular and for extracurricular work.

The value of the various programs offered by us are ensured through the regular updating of the cutting edge course content by the best academic experts and the respective Board of Studies. Some of the initiatives taken at JLU are inclusion of mentoring and internships, basket courses and choice based credits, student centric portfolios and career enhancement programmes, Ignited Minds Lectures and University Industry Interphase, clubs and houses for extracurricular activities and sports promotion.

Tell us about the Challenges that you face & how do you overcome them?
Yes, we have challenges from the overbearing attitude of the various councils and the regulatory bodies who tend to be more controlling and less facilitating in a country where flexibility and innovative approaches to both delivery and content in higher education are of paramount importance. We at JLU promote ‘international tie-ups’, ‘cross cutting course delivery’, ‘rational thinking’ and ‘relevant’ mode of study that requires tremendous collaboration, planning and effort particularly in the face of increasing interference from the government. We constantly redesign the content of the course according to the varied needs of the industry and our students and this proves to be a challenging exercise.

What has been your most cherished milestone?
To be awarded as the University of the year by the Chief Minister of Madhya Pradesh as adjudged by the Federation of Indian Chamber of Commerce and Industry consecutively for last three years and to be certified for the last two years as a ‘Global League Institution’ by Great Place to Study & Research Institute, at the House of Commons, UK.

If you were to do one thing differently, what would that be?
Yes one thing that I would like to do differently would be to pay more attention to introduction of online and digital learning in various schools of the University. In these times of globalization the best approach to internationalization will be to advance virtual and augmented reality so that our students can leap frog in an increasingly flat world of tomorrow. No doubt as Mahatma Gandhi once observed that “a University is at the top. A majestic top can only be sustained if there is a sound foundation” and it is this thought that will inspire my own vision for a futuristic University of tomorrow.

What would you like to achieve in the coming years?
The greatest achievement of the University will be to be recognized as a World Class University of distinction and as global powerhouse of research, talent and learning. My best achievement will to create a spirit of intellectual curiosity in the student’s mind and in striving to be better than the best.

I do look forward to inspire a purposeful direction to the University as we endeavor to further the academic standing of the University, both nationally and internationally. We all have a stake in this journey as Swami Vivekananda mentioned ‘Education is the manifestation of perfection already inherent in man’. It is in this spirit that the University hopes to achieve newer milestones.