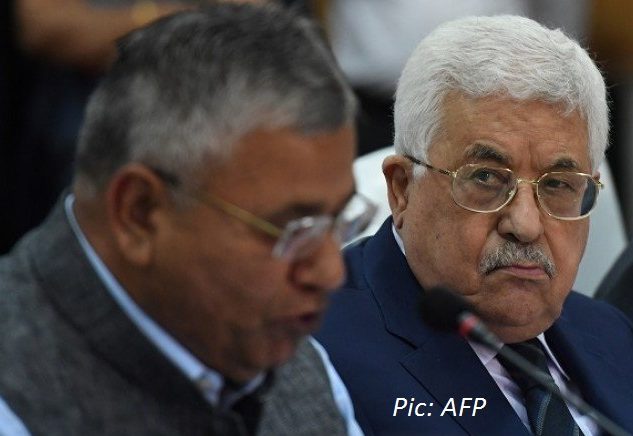 Palestinian President Mahmoud Abbas began a three-day visit to India on Monday with a tour of an IT facility that is helping Ramallah build a high-end tech hub.

Abbas, who arrived late Sunday, will hold talks on the Middle East peace process, among other issues, with Prime Minister Narendra Modi in coming days. But his first stop was to a technology institute outside Delhi where India is lending its IT know-how to help Palestine spur job creation in the tech sector.

India agreed in October to spend US$12 million financing a new IT hub in Ramallah in a sign of India’s “strong commitment to support [the] Palestinian cause”, the foreign ministry said at the time. Abbas and his delegation spent nearly two hours touring the Centre for Development of Advance Computing.

The Palestinian leader will this evening attend a function at the India Islamic Cultural Centre in New Delhi. Abbas will on Tuesday be formally welcomed at the presidential palace before meeting Modi, Indian President Pranab Mukherjee and Foreign Minister Sushma Swaraj.

New Delhi is hosting Abbas ahead of Modi’s visit to Israel in July – the first by an Indian prime minister. India has traditionally voiced its support for Palestinian statehood, initially shunning diplomatic relations with the Jewish state. The frost has thawed, however, with India – the world’s biggest arms importer – increasingly seeking closer defense ties with Israel, a top weapons exporter.

We Had Been Eyeing Ciber’s U.S. Assets For Years

The “People First” Leader on a Quest to conquer World Marathons