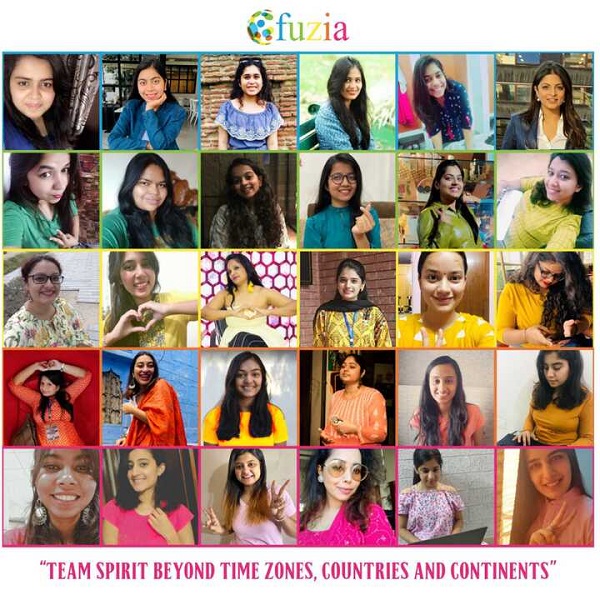 As an eleven-year-old, Riya Sinha was already a published author. While she was strolling through a bookstore in Palo Alto after the publication of her novel ‘Runaway Twins’, a 6-year-old kid came running to her. The little girl said that Riya’s book had inspired her to write and that she now wished to become an author too.

This incident sowed the seeds of Fuzia, which started off as a writing club in 2012. Three years later, Shraddha Varma joined the organisation and turned it into its present form – a space for women to connect, exercise their creative talents, work towards uplifting their sister women and vent out their mutual frustration with the stereotypical codes of their society.

Since its inception, women from around the world have looked at Fuzia as a safe space where they can celebrate the joy of sisterhood in an unfiltered manner. Within the span of a year, they had already garnered a user base of more than a million women which has grown to more than 5 million now. Over the past 5 years, they have won several awards such as ‘Iconic Teen Entrepreneur and Innovator’ at the Women Economic Forum. They later launched an app along with continuing to grow their website.

“Our biggest achievement has been that we were able to make our users showcase their talent and bring smiles on their faces, making them financially independent as well,” says Riya. She points out the global community (from 35 countries) facilitates all users to have enough community support and care.

Moreover, Fuzia is focusing on boosting women’s confidence and giving them their due recognition, adds Shraddha. “When you don’t get appreciation for what you do and create, your self-esteem gets battered. Our sole purpose to celebrate women and their creative zeal so that they can live their dreams,” she explains.

Users can showcase their talents through special events like live sessions, campaigns, online learning, webinars, workshops, experiential learning and contests besides making posts about them. This talent is then presented to the world on the website and various social media platforms with the aim of providing them economic benefits. For this, the right skill is presented at the right place for it to be noticed.

Various interviews with the talented women and their inspiring stories find their way to Fuzia TV, inspiring other women to come out of their shells. “Believing that talent shared is talent encouraged, we marshal various campaigns and content where women participate globally. The entries are studied thoroughly and participants are provided with training and career opportunities in areas of their interest and expertise,” informs Shraddha.

The in-house talents, subject experts, social media influencers, entrepreneurs, and other inspirational women often collaborate with Fuzia to organise interactive live sessions so that other users can get their doubts resolved and the right training to start their own ventures. “We are proud of our team members who now run their companies after getting the right set of experience and networking,” shares Riya.

The co founders believe that through their platform a chain of empowered women empowering other women has started, which will only stop when each woman in the world is capable of living independently and making their mark.

Several community members have actually credited their career and life transformation to Fuzia. Humaira Ferdous from Bangladesh says she wouldn’t have realised her potential as a graphic designer if not for the community’s support. Student Ira Gore is grateful for the opportunity of working as a content intern for the company after being a part of the users who expressed interest in the written word. Sarita Das, who describes herself as a passionate art and music lover, now makes diverse videos for the company.

Throughout the lockdowns that have been in place around the world, Fuzia ensured its members were not just productive but motivated and entertained as well. There were several contests and campaigns on various social media platforms, including one involving making and donating masks to the needy.

“We came up with a special page on our website called ‘Quarantimes’ which aimed to provide self-help resources such as blogs and microblogs for entertainment and learning. Members were also given cues on coping with the mental and physical fatigue brought in by feeling inactive and unproductive,” informs Riya. She adds that the goal was to engage them in interesting tasks and keep them hopeful with positive affirmations.

Shraddha feels sad to notice that discrimination based on gender, race, and sexual orientation, as well as unequal wages, are still prevalent at modern workplaces. “Also, many corporations claim to be committed to gender equality but seldom put it into effect. They miss out on these employees’ skills, which has an effect on the company’s productivity,” she points out.

Through gender diversity, organisations can benefit from different and new perspectives and move forward with one that best suits the needs of the projects, they believe, concluding that there is still a lot to be done in achieving equality for women, LGBTQIA, and non-binaries.

“Companies must reconsider their job descriptions in order to be more inclusive. They must eliminate the wage difference between men and women and be honest about the benefits they are receiving,” says Riya when asked what can be done to improve the situation. They can also help employees maintain a healthy work-life balance and comfortable hours for employees with children, she adds.

Fuzia is not a women-only platform; any individual who supports the cause of women empowerment, feminism, equality and mutual support is welcome on it. “Men constitute a majority of our population and without their support, the goal of empowering women would remain incomplete. We believe that his is one of the most crucial steps in building an equal world as we move forward,” says Shraddha.

However, most men in India firmly believe that women are better as homemakers than they are at work, feels Riya. “People from both genders of the older generation think men are assigned as breadwinners. They do not encourage women who are related to them to enter the workforce or voice their opinions,” she adds

This patriarchal thought process not only hinders the very cause of women empowerment in traditional countries, but also holds back men who care about the cause, asserts Shraddha. “They also find it difficult to take orders from women in management roles and feel threatened by their control. Many men are indifferent to the cause of women’s empowerment and see no reason to get involved,” she says.

“Instead, men can act as allies to women by showing support for the women’s empowerment movement. They can increase their share in the domestic work and family responsibilities,” suggests Riya. She thinks that they need to promote gender equality when fighting for women’s access to jobs, rights, and opportunities.

Despite considerable progress made in this direction, complete gender equality still remains a pipe dream. The two co-founders ascribe the following reasons for the absence of a fender balanced workplace in today’s times:

Businesses with Passion, Soul: Encouraging CSR in a post-Covid World