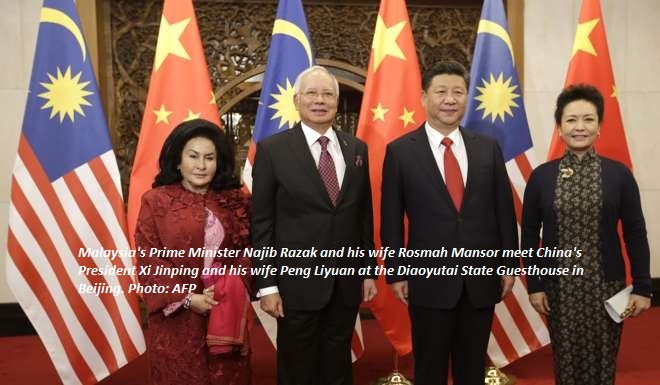 BY AMY CHEW – scmp.com: The rumblings of discontent started before Malaysian Prime Minister Najib Razak had even set foot back on home soil. While some of his countrymen saw his recent visit to China as a groundbreaking feat that would boost the nation’s flagging economy — he did, after all, secure deals worth RM144 billion (HK$258 billion) — others, in particular the country’s opposition parties, accused him of selling Malaysia’s sovereignty and compromising its territorial claims in the South China Sea, where the two countries are in dispute.

Businessmen complained they could be overwhelmed by cash-rich Chinese companies, stoking discontent among ethnic Malays — the two-thirds of the population known as the bumiputra or sons of the soil.

On Trump’s outlook towards the 1MDB probe, a young Malay entrepreneur said “Obviously it will create resentment. The majority in this country already feels provoked by the Malaysian Chinese and their grasp of the economy”. But any such resentment may not be universal . Some analysts expect members of the Umno ruling party, who have complained about potentially losing business to the Chinese, to actually benefit from Beijing’s largesse. “Yes, there is resentment among Umno leaders with regards to the deals, but again these are the same leaders that will benefit through contracts from the projects and other means,” Asrul Hadi Abdullah Sani, an analyst with risk consultancy BowerGroupAsia said.

But businessmen and bankers dealing with mainland Chinese investors say Malaysia’s ethnic Chinese may not turn out to be the prime beneficiaries of Najib’s deals.“China’s first preference for business partnership is with government-linked companies. There will be plenty of opportunities there for Malay entrepreneurs,” said one investment banker.