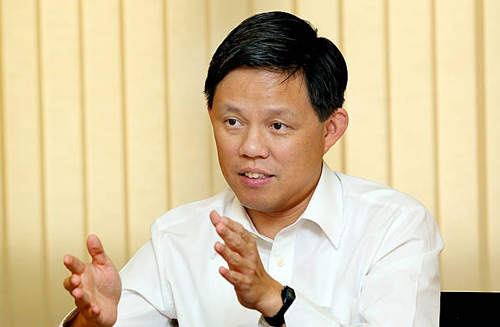 Singapore and China have collaborated closely in the planning and implementation of the Chongqing Connectivity Initiative (CCI) and both sides are committed to tracking and supporting its progress, said Minister in the Prime Minister’s Office Chan Chun Sing.(ChannelNewsAsia)

Mr Chan, who was co-chairing the second Joint Implementation Committee Meeting for the CCI with Chongqing Mayor Huang Qifan, said Chongqing will have a demonstrative effect for neighbouring cities and contribute to the economic success of Western China.  The CCI, launched last November when President Xi Jinping visited Singapore, is the third Government-to-Government project between Singapore and China. It focuses on developing financial services, aviation, transport and logistics, and information and communication technology in the city.

The master plan, which focuses on transport and logistics, includes plans to build a multi-nodal logistic hub in Chongqing to allow logistic players to come together to integrate their operations seamlessly, on an electronic platform, said the minister. The broad master plan has been agreed upon, and the next step will be implementation through specific projects, Mr Chan said. “The second thing we’ll be looking at is to see how we can even out the new lines of communication which will allow us to overcome the potential bottleneck that is going through Three Gorges Dam at this point in time. Because very soon, the Three Gorges Dam will reach capacity, so we have to find new routes to bring the goods out in a way that is fast and efficient,” he added.

Chongqing was one of seven cities in China to be granted free trade zone status on Wednesday, meaning that goods in the city can now be handled and re-exported without being subjected to the usual regulations and taxes. This development will help facilitate the CCI, Mr Chan said.  Prime Minister Lee Hsien Loong will make his first visit to the city since the project’s launch on Saturday, as part of his four-day working visit to China that starts Friday.