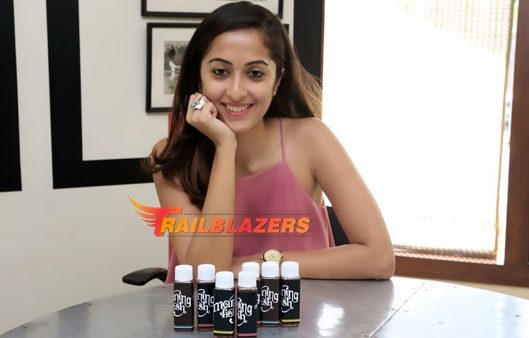 Mitali Tandon, a young 25 year old entrepreneur wears many hats at her company. She loves to build things and that’s exactly what she did with Morning Fresh. The entrepreneur bug bit her early in life as both her parents are entrepreneurs and she has grown up in a free thinking and independent environment.

Mitali has recently launched a unique product — Morning Fresh, that would allow young party goers to enjoy themselves while ensuring the hangover does not follow them through to the next day and steal away the morning with its after effects. She understands, that today the younger generation is diet conscious and wants to know what they are eating. drinking and how it affects them. Keeping that in mind, she has chosen to keep Morning Fresh – a first of its kind, natural & zero carb-zero fat that  helps flush alcohol out of the system. Two years of intense research have gone into it by a group of dedicated and qualified professionals before the product was launched in the market.

She got her first taste of entrepreneurship when she joined the ‘Young Enterprise’ group; an international program that encourages students to develop viable business ideas and create a sustainable business model. She was the Operations Head for the enterprise, responsible for sourcing materials and co-ordinating with other teams to deliver the final product to be marketed. She was later selected along with her team to go to Seattle, USA on an exchange program to meet other schools who had successfully undertaken similar projects, to share our learnings and ideas.

Mitali studied in the United Kingdom, for 3 years pursuing her double honours in Criminology and Social Policy. Her first job was with PWC, Forensics Department, where she dealt with the financial aspect of fraud and worked a lot on backgrounds checks, data analysis and investigating evidence. Soon after, she worked as the head fundraiser for Samvada; an NGO that provides education for young people from Dalit and Adivasi backgrounds.

Mitali loves jazz music, swimming is her stress buster, is dog lover and hopes to have a big house with 10 of them at least someday. She is also a big event planner and loves the adrenaline rush that comes along with it.

About your entrepreneurial journey

“It started for me very organically. While I was at University and everyone was looking for internships at the big glitzy companies of the corporate world, I found myself seeking unusual opportunities that required me to work very hard and would challenge me mentally and physically. One of the first internships I took was with Tihar Jail, New Delhi. I was a student of Criminology and Social Policy, so it seemed like a great learning opportunity. Tihar had introduced a new education program that that allowed inmates to complete their education while serving time in prison. I spent 2 months with young male offenders between 18-25 years teaching them Basic English, Math, comprehension and analysis skills.

Since then, I realised the impact that you can have and the adrenaline rush that comes with seeing your ideas come to life. I started to experiment with ideas and execution and as I grew, the degree of experimentation evolved to larger scales and also to include the community in a more meaningful way. I initiated ‘Shop For A Cause’ a community based concept that deals with the re-distribution of resources and ‘Burger Riot’; a fun and young fundraising platform that encourages friendly competition and interaction between restaurateurs and food enthusiast alike, where all proceeds were donated to charity.”

“I think one of the more challenging aspects of building Morning Fresh, the brand, has been my experience as a woman in the F&B space. While there are a lot of women in the front end of the service sector, the liquor aspect of the business is primarily male dominant. Women in business are judged too quickly. I remember visiting the first liquor outlet that we started stocking Morning Fresh at and I spent an entire weekend, along with sales promoters, talking to customers and selling the product. All the staff at the store where male, including the promoters and they were shocked and found it odd I think, like I was out of place.

Then when customers started coming into the store to start asking for the product themselves, things settled down and they realized that I was there for serious business. I think you just have to be determined and believe in yourself. If you have got both those set in your core, you will always find a way to stay focused on the positive things and find a way to make it work. Challenges then become part of your every-day working routine and I mean, if you aren’t challenging yourself at every level — how will you grow?”

“Music, art, the ocean, real stories, travelling, silence, dancing, eating a great burger, my grand-parents. It’s impossible for one single thing/person to inspire you, the world is such a vast, alive and complex being — we have to find ways to actively contribute to it and live in it so we can constantly learn from it and work towards making it better than it is.”

“We started doing research of Morning Fresh in 2014 and got into the market in end 2015. Our parent company, Sericare, founded by my father are pioneers in the field of sericulture and using silk as a bio-material. I remember when our research found that certain amino-acids in the silk protein resembled a particular naturally occurring liver enzyme.

I was quick to gauge the gap in the market and knew the potential this product had, as binge drinking is on the rise, there is a proliferation of bars and restaurants in the city and youngsters are increasingly leading a fast-paced life. We developed Morning Fresh as the only post-drinking solution to help relieve customers from the after-effects of alcohol consumption. Most people rely on home-remedies/informal methods. Our target audience is also very health conscious and we were particular about keeping the product natural, portable and easy to consume.”

“I think the problem is in the comparison and not about which one is better or the best half. It’s exhausting to constantly be compared; to men, to women, to peers, to siblings. If we spent more of our time seeing things for exactly what they are, rather than comparing, I think life would be a lot easier. That way you are really assessing a person for their skill set, their abilities and potential rather than judging them by their religion, race or gender.

Our socio-economic system is so geared towards comparison that we spend more time being critical about the things we do not have or are not good at, rather than focusing and honing our natural abilities or talent.  So for me, there really is no better or worse half, there are different people who are capable of different things and I think that really is what makes life exciting.”