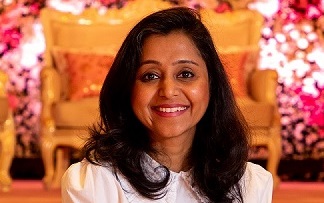 While sipping on her drink at the tropical paradise that is Andaman Island in 2006, Prerana Agarwal Saxena, then a finance professional, had just one thought – hope she could take the entire experience of the moment home with her. She did this by organising a beach themed birthday party, full with sand, shells and the sounds of the ocean after returning home. Since then, life has been one big party after the other for this co-founder of event planning firm Theme Weavers Designs.

Several requests of organising theme parties later, she got together with her sister Annushree Agarwal who was an event manager to form their own company in 2008. An MBA from the K J Somaiya Institute of Management, Mumbai, India, Prerana worked in the banking and finance sector for four years before she found her true calling. They started with themed birthday parties, graduating to corporate events and eventually finding themselves as one of the busiest luxury wedding planners in India.

“We found out weddings are where our hearts lie because there’s a lot of scope for creativity in them. Our clients found it value-adding as we were always creating a new creative theme for each event and never repeated an experience,” says Prerana about finding their niche in the event planning business. They specialize in organising destination weddings in palaces, forts and other monuments.

Themes that they have recreated include the Hanuman, Portugal era, the time of Vasco da Gama, boat or palace on wheels, making sure to transport the guests across time and space. Themes, she believes, are a part of our daily lives in the form of designs, architecture and our history and provides structure to an event and creates a differentiated experience.

Since its establishment, Theme Weavers Designs has organised more than 250 weddings, each one being grander than the previous one. “The journey has been a roller coaster in some ways. We have made sure we don’t become complacent and have always made ourselves uncomfortable again by asking ourselves what’s next?,” says Prerana when asked about sustaining the business for more than a decade now. She adds that the founder duo was always focused on upping the game and moving the goalpost further for themselves.

When they began, the bride and groom would be coy and all the planning for the wedding events was done with other family members. Over the years, they have seen the bride and groom becoming very involved in the entire process. “Nowadays, they want the experience of the whole wedding in line with their contemporary thinking. So the events have to be ‘Instagrammable’, with off-the-beat and fun themes,” informs Prerana.

While each wedding that they have helped organise has been special to Prerana, she holds sister and co-founder Annushree’s wedding in Jodhpur as one of the most special memories of the company. After all, it was their ideal version of a wedding that had developed with the experience of organising so many. Each detail was well thought of and executed, making it the wedding the team remembers and loves the most.

The pandemic brought along a new set of challenges for the events and wedding industry. The company has adapted themselves to the times. In the middle of the country-wide lockdowns in July when the number of guests at a wedding was restricted to 50, the company was still recreating some grand themes. “In one case, the father of the bride told us that he doesn’t wish to pipe down the celebrations despite the limited headcount. After all, his daughter would only get married once, he had said,” recalls Prerana.

The conversation with this father made her realise that families are more concerned about the experience being right, not about how long their guest list was. She worked extra hard over the next few months to help create special memories for all her clients in the subsequent months. She says that since the Indian industry has evolved over the years, clients have become more mature and better informed. This, she adds, has meant they expect more operational excellence and creative solutions from the event organisers.

This quick adaptability is one of the reasons that Theme Weavers get more clients every year than the previous. While it is currently based out of Gurgaon, National Capital Region, and provides their services across the country, the company has big expansion plans.