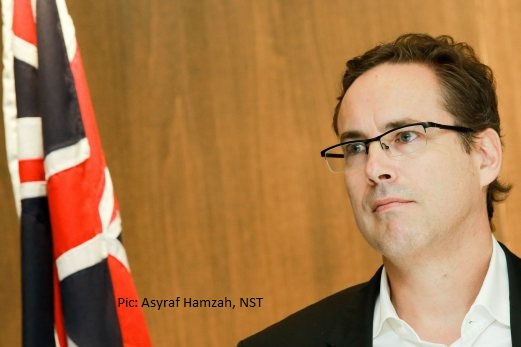 The Australian government wants more of its students to study in public and private universities in Malaysia. (NST News)

“We introduced the New Colombo Plan two years ago and the response has been very good. Under the plan, 150 students from Australia have been given scholarships to study in Malaysia for the first year and 270 students in the second year,” said Smith. He said most of the Australian students in Malaysia were in Universiti Malaya and Universiti Kebangsaan Malaysia as well as several private universities.

“This programme is actually university-driven because the students need to have their course credited by universities in both countries,” said Smith, adding that the Australian government has allocated A$150 million for the New Colombo Plan for the first four years. Smith was speaking to the media during his two-day visit to Johor Baru yesterday.

Smith is also expected to have an audience with the Sultan of Johor Sultan Ibrahim Sultan Iskandar and a meeting with Menteri Besar Datuk Seri Mohamed Khaled Nordin.

Iris Malaysia to supply e-passports for Nigeria in RM170mil deal