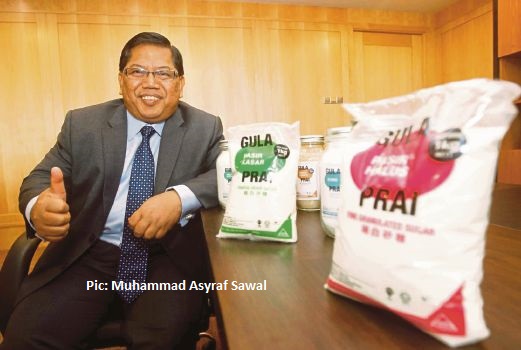 MSM Malaysia Holdings Bhd, which controls a 60 per cent share of the sugar market in Malaysia, is growing its exports and seeking to buy assets in Asia Pacific.  (NewStraitTimes)

“Currently, our annual refining capacity of 1.25 million tonnes per year is ranked within the top 25 (in the world). Construction work on our new factory in Tanjung Langsat, Johor Baru, will start next month. When this refinery is completed in 2018, our group capacity will almost double to 2.25 million tonnes,” Amri told Business Times recently. “We aim to be a top 10 sugar company in the world by 2020. So, while we are focused on building our new refinery in Johor to better serve the export market, we are also open to acquisitions of sugar assets in Asia Pacific.”

Currently, MSM Malaysia’s sugar refinery in Prai is able to process 3,000 tonnes per day while the one in Chuping has a daily capacity of 600 tonnes. The refined sugar is retailed under the brand “Gula Prai”.  On the global sugar price trend over the past decade, Amri noted that it ranged from as low as US$0.07 (28 sen) per pound to as high as US$0.35 per pound. “Nowadays, the sugar price is around US$0.19 per pound.”  Since February, Amri said MSM Malaysia had set up a trading desk in Dubai to purchase raw sugar and hedge back-to-back for better stock management.

“Since May 2012, MSM Malaysia no longer has any sugarcane estates. All our raw sugar supply is imported via Penang Port.” Two weeks ago, it was reported that Tradewinds Group might acquire FGV. There were also hints of a merger between MSM Malaysia and Tradewinds Group units, namely Central Sugars Refinery Sdn Bhd and Gula Padang Terap Sdn Bhd, which are capable of producing 2,300 tonnes of sugar a day.  FGV told Bursa Malaysia it was not aware of any potential suitors from Tradewinds Group or other companies. Such a merger is also unlikely because it would trigger a sugar monopoly and run foul of Malaysia Competition Commission rulings.

Amri, who has been with Felda and MSM Malaysia for 27 years, also gave his take on the sugar market. He said MSM founder Robert Kuok sold his sugar business to Felda Group in 2009.  “Kuok is the world’s sugar king via his stake in Wilmar International Ltd. Since 2009, however, Malaysia’s sugar king is FGV. When Kuok sold his sugar business in Malaysia to FGV, it included a 20 per cent stake in Tradewinds Malaysia Bhd. “Four years later when Tradewinds Group de-listed all three of its vehicles from the stock exchange, our parent FGV also sold off its 20 per cent stake in Tradewinds Malaysia to Tan Sri Syed Mokhtar Albukhary.” Malaysia’s sugar market is considered a duopoly with MSM Malaysia competing against Tradewinds Group.  In ensuring a steady supply of sugar, enforcement officers from the Domestic Trade, Cooperatives and Consumerism Ministry regularly visit MSM Malaysia and Tradewinds Malaysia refineries to verify that the reserves can last for at least 45 days. Sugar is a controlled item under the Price Control and Anti-Profiteering Act 2011. Individuals who sell above the ceiling price of RM2.84 per kg face a RM100,000 fine or three years’ jail or both, while companies face a RM500,000 fine.

Beginning 2011, certain companies in the food and beverage industry could apply for approved import permits (APs) to fulfil a portion of their refined sugar needs. The pricing accorded for AP holders at that time was lower than the consumer retail price of RM2.84 per kg.  These food and beverage manufacturers, despite having their own APs to import refined sugar, also bought from domestic refiners and wholesalers. They used slightly more than half of the 1.4 million tonnes of sugar consumed a year in Malaysia.

After the government withdrew the sugar subsidy in October 2013, the wholesale price rose to RM2,680 per tonne while the retail price remained at RM2.84 per kg.  In April, sugar APs for the food and beverage manufacturers were cancelled. Eligible industrial sugar users were assigned special price quotas supplied by local sugar refineries. The special quota was fixed at RM1,900 per tonne to reflect the world sugar pricing at that time. However, in the last few months, world sugar prices had been on the rise as supply went into a deficit cycle.

Therefore, from August 1, the government raised the special price quota to RM2,500 to discourage sugar smuggling to neighbouring countries.  SME Association of Malaysia president Michael Kang reportedly said the RM600 per tonne jump in wholesale sugar price would have a significant impact on the food manufacturing industry, adding that food price increases were inevitable.  He listed canned drinks, bread, biscuits, soya sauce and 3-in-1 hot beverages as using a lot of sugar. In response, Amri said there was no justification to raise prices of soft drinks, confectionery, cakes, chocolates and ice-cream as the special price quota was a small fraction of the total purchased by the industry.  Moreover, he said Malaysia’s refined sugar was the second cheapest in Asean after Thailand.

Blending designs perfectly to melt the barriers between inside & outside