Being a Woman was Never a Barrier: Nina Aguas

Life turns a Big Party with Destination Weddings business for… 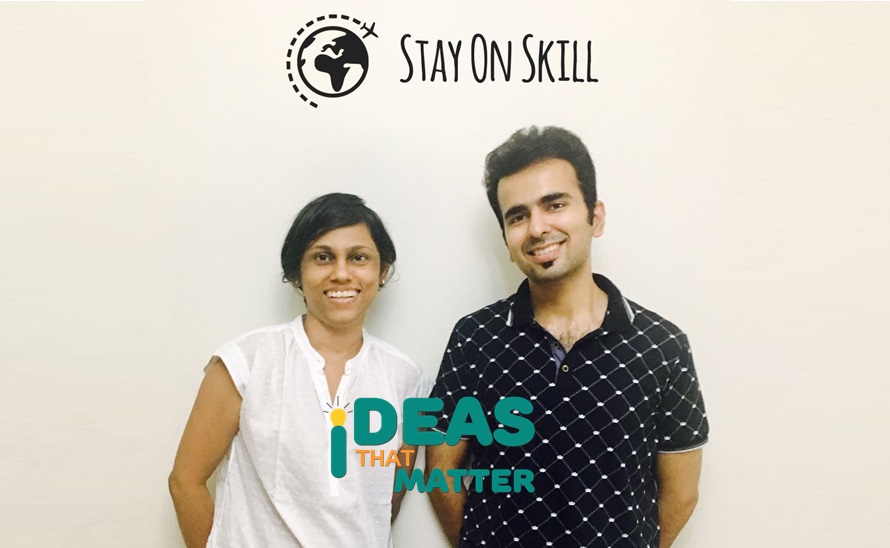 Amidst the buzz around skills development, make in India, industry readiness etc. the duos – Rajshree & Arjun have come up with a unique idea of mixing pleasure with sharing skills & knowledge through their venture Stay on Skill. Its is a platform that helps people with skills to travel the world and get free homestays, in return, helping their host learn a skill they are good at. Both the co-founders Rajshree Bothra and Arjun Tuli share a common passion for travelling. The Idea was conceptualized with the motive of making travel affordable.

Across India, their hosts have learnt interesting Guitar, French, Baking, Yoga, among other skills till date. Over the last 2 months, there has been more than 40 successful trips, in which the travellers have saved more than INR250,000 (approx US$3800) in stay cost, and hosts have spent more 260 hours in learning new skills. Its quite interesting to note that over 50% of them were solo Women Travellers.

Rajshree spent 11 years in corporate world in global, Asia and country roles and now has been immersing herself in the startup ecosystem in various forms – mentor, consultant, a short stint as an employee at Zivame and now co founder at Stayonskill. She loves travelling and have been so far to 30 countries. Apart from travelling she likes baking. She is a pastry Chef trained from world’s best culinary school in Paris by the name of Le cordon Bleu. She comes from a Marwari family of generations of entrepreneurs, so somewhere she has always enjoyed running businesses. In her corporate career also the same was the case where she grew or turned around businesses. She holds a Economics Hons. Degree from St Xavier’s, Calcutta and an MBA from MDI Gurgaon.

Arjun never really knew what entrepreneurship was or how to even pronounce the word properly until the second year of his bachelor’s in Electronics and Communication Engineering from National Institute of Technology, Delhi (NIT Delhi). He applied to B Plan competitions of IIT Delhi, IIT Bombay, IIM Calcutta, and IIT Guwahati and reached the finals and there after he learnt how to give presentations, got more field knowledge from his mentors, understood how businesses work, and how ideas that look good on paper don’t always work in real life.  Later he started learning how to code – to turn his ideas into reality. He took CS course from the famous Harvardx to learn web development. In the final year of his college, he started working on the project Knowledge Maps, with one of his friends – Pavneet Tiwana, who later became his co-founder.

Here are some more insights from the Entrepreneur duo about their journey.

On the other hand, I was looking to travel – to do away with the burnout I had after Knowledge Maps. My previous co-founder – Pavneet, and I were still in touch and used to discuss new things that excited us. During one such talk, he mentioned about an idea of getting coders develop to WordPress templates for hostels/hotels, and maintain them in return of getting stay and some fee (for maintaining the website).

The idea seemed interesting to me, but I saw it in a different light – where the skill should not be limited to coding, and the product should not be limited to websites, and the hosts should not be limited to hostels/hotels. Between the two of us, we could not reach a consensus for the vision of the idea. But it had excited me enough to take it up individually. I probed a lot into finding the reasons for Couch surfing failing in India, and the problems that current free stay products were facing. I started discussing perspectives of this idea with my fiancee. And during one such discussion, we reached the idea for Stay on Skill. To test if the idea had legs, I made a simple landing page and shared the link on my facebook, and beta list. And I immediately started getting responses from a lot of people. Within a week, I had over 1000 signups. I then reached out to my earlier mentor Rajshree Bothra.

Rajshree loved the idea, and felt thrilled about it, especially because she was an avid solo traveller. Having extensively travelled, she increasingly wanted to make people experience the joys of travel and thus wondered how one can travel cheaper.

During the same time, I also did some jamming with my other mentors – Abhishek and Kabir. Abhishek suggested that for execution, a good way would be to launch this idea as a campaign – India Tour – covering 25 cities with 2 hosts in each and having 50 travellers travel across India. This seemed like a great idea. I and Rajshree both joined hands as co-founders and started working dedicated to bringing this idea to life. As we were based out of different cities – Chandigarh and Delhi, we used to have long discussions over calls, and meet whenever possible – when I would be in Delhi and so she would be in Chandigarh. We launched the campaigns in June of 2017 and had a deadline to start India Tour by 1st July. We got a tremendous response on the social media. Within weeks, more than 500 skilled people applied to travel to different Indian cities. These people were not just from India, but from Spain, the United States, Argentina and Indonesia – more than 10 countries across the world.

Who is your inspiration and why?
Rajshree: The experience of travelling itself was the biggest motivator. Then there were concepts like Airbnb, couch surfing that are making travel easier for young millennial. On the other hand people are adopting alternative ways to learning and social media is fuelling the desire for new experiences. All this made the cards line up neatly for Stayonskill to shape up.

Arjun: I don’t have any business icons or anyone that I like to follow. When I started out with entrepreneurship, I did look up to a few people and wanted to be like them. I used to read those click bait shitty articles about what successful people do in the morning, and stuff like that. But as my journey matured, I realised what a waste of time these things are. All I want to be is who I am. Wealth and success don’t drive my vision or my way of building Stay on Skill.

Did you face any challenges? How did you overcome them?
Both: This is a new to the world concept that encourages solo travelling. There are challenges and we have tried to overcome them in pilot stage, thus building a market validated consumer friendly product.

To recall some of the challenges we have faced till now:

What is your philosophy when it comes to doing business?
Rajshree : Businesses should be run in socially conscious manner creating win solution for both the entrepreneur and the consumer. It should make the world a better place by being there. It should have a shared purpose with the consumers such that the ecosystem benefits by its scaling up.

Arjun: My approach towards doing any business is that there should be value in it for both the sides. Don’t try to cheat on someone by overselling them your product. At the end of the day, it will come back to bite you. Be very clear about what you are offering and how it will benefit someone.​

What’s your business model?
We have been testing different business models and have been successful in executing them. But it would be too early to finalize as we are still iterating and trying various methods. We are looking to raise seed funding as well, in parallel.

If you were to do one thing differently what would that be?
Rajshree: As of now, I only wish we could make the product a world class one with speed. We are constantly course correcting and taking early feedbacks and incorporating these in the product. So at this point, there isn’t anything that I’d like to differently…yes faster definitely but not differently.

Arjun: Improve upon my attitude towards dealing with people – everyone – from my co-founders, to interns, to users to family members.

What would you like to achieve in the next coming years?
Both: The objective would be to get more and more people to travel, connect people from different communities and cultures so that they get to enhance their perspective on life and open their mindsets. For us personally, this is what travelling is all about. And this is the vision that we hold for stay on skill. Going statistically, after the next 12 months, we aim to get about 50 trips going every day.

Every business leader needs to be a recruiter today: Mollie Kohn