Entrepreneurs are responsible for more than just their ambitions: See… 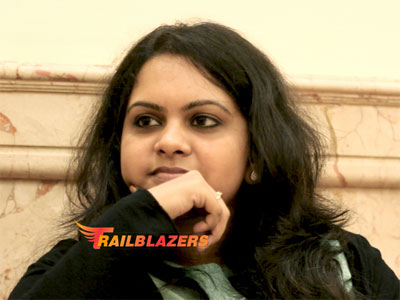 Popularly known as ‘Singer Megha’ in the Indian Film Industry, the Co-creator of Technology of Excellence Installation and Co-Founder of Antano & Harini group of companies, Harini Ramachandran takes the centre stage from being a Celebrity, to having worked with some of the leading Academy Award winners,  National Award winners, Directors of large Organisation to Teachers and Students who went through Complete Transformation – help them make Big Leaps in life in the shortest time.

Currently the Co-Founder & Executive Director at School of Excellence (www.soexcellence.com) Harini works with thousands of people from over 10 countries all the way, impacting their lives with her work. A degree in Commerce, followed by Human Resources (Masters in HR), and a brief stint in Event Management and then, very in-depth studies in Neuro Linguistic Programming, Harini is endorsed by the Co-creator of the field of Neuro Linguistic Programming (NLP) Dr. John Grinder, one of the finest in NLP in the world today. She also continues to be mentored by Dr. John Grinder, who has earlier mentored some big names including Tony Robbins.

The other role she plays is that of a Musician in her own right – continuing to have a successful stint as a playback singer. Having worked with legendary Indian music directors like A R Rahman, Ilayaraja, Harris Jayaraj and G V Prakash, she has over 75 songs to her credit across languages with 500 ad jingles and counting!  She has recently taken to songwriting and composing as well, and will be releasing her own productions, soon. Her music career started in college. While she was enjoying recording and performing live, Harini always found it challenging to remember lyrics of songs. So she used to keep the book of lyrics on a stand in front during live performances. In one of her concerts, she happened to invite Antano Solar John, the Chief Technology Officer of the company she was interning for. He offered to help with an Installation – the capability to remember lyrics, each time! Intrigued by the offer, Harini took one session and the very next day, she tested her skill at a big concert in one of the largest halls in Chennai.  It was no surprise that Harini managed to sing all of the songs first time, without taking the lyrics book on stage!

Baffled by quick and powerful the change session was and how it showed up, she took keen interest in understanding ‘why’ he offered that specific installation and ‘how’ he did it. In the days, weeks and months to come, little did Harni know that she would blossom in literally every aspect of her life. She recalls how she grew in her career in the corporate world quicker, her performance in studies skyrocketed and noted composers expressed how her ability to render in recordings had significantly improved. All of this happened as a byproduct of that one change she experienced. So the question she asked was – If ONE change can change someone’s life, ‘How’ do you identify what the change is, and once you have, how do you make the change in a way that it sustains and grows with time?

Today, what Harini does is, helps find answer to that specific question through Excellence Installation – the art of identifying what specific change to make in an individual that can help him/her make the Biggest Leap in the shortest time and continue to Evolve and Grow, rapidly. Excellence Installation is the surest way to fix personal challenges as well as Evolve Personal Excellence and grow holistically – in relationships, career, happiness, satisfaction and all things one lives for.

To be trusted by the Who’s Who in the Indian Music world, most reputed celebrities and people from literally every walk of life, who come to us knowing fully that they will get what they want. That faith that people now had, and all of the work I’ve done to get here cumulate to the high point I am in right now, in my career.  There have been these special moments such as my first recording, my first song for Academy winner A R Rahman, my first client for Excellence Installation and many more.

The most defining ones and the most close to my heart are the Medically impossible cases I’ve worked with. Recently, two of them with completely different and rare forms of paralysis. And with both, we’ve achieved what is considered medically impossible. Bringing back real movements once again, and where the people are now independent and are doing much more than they could. These moments really are the ones that let you know that there are very few people in the world doing what you do. And so you should do more of it, because the world needs you and the world needs to benefit from the work you do.

Just like I mentioned above, working with the two medically impossible cases have been the most challenging assignments so far. One of them is a young girl paralysed by birth and has some brain cells damaged. The other girl suffered a stroke a few years ago and had one side of her body paralysed. Working with both of them has been the most challenging and most fulfilling.

Another very challenging assignment for me is to produce mind-blowing results in an Individual’s singing abilities through a very specific tailor-made process I’ve developed with the background of Excellence Installations and Neuro Linguistic Programming. We take a set of people – a group size of 20, each of different levels of singing abilities – some completely tone-deaf/rhythm-deaf and some who are already very good. And within 1 week, through a very immersive process, each of these participants demonstrate very superior level of performance compared to the ‘pre’. We’ve shown the ‘pre’ and ‘post’ to music experts who exclaim that in 1 week, such a leap is near impossible. There’s still a lot of research we are doing in this line, before we open it out fully to the world.

What excites me most is Modelling Excellence and cracking the code to break out of mediocrity in any field and do exceedingly well! When this is available as an Installation, we’re talking real, measurable results.

Dr. John Grinder, the Co-creator of NLP. Because he is a Genius. He’s a genius who has coded how other geniuses do what they do and made it available for us to model. We’re in a humble quest to take a step further, what he has done and help ‘common’ people achieve what they didn’t they could!

10,000 Excellence Installations – Delivered. With 100% Success achieved in over 95% of the cases in just the First session! These results have stood the test of time and have been measured not just after the session, but even a few months and years after the Excellence Installation session took place. This makes me immensely happy because it not only signifies unprecedented rates of Quality ever seen in the Change Industry, but also signifies growth, scalability and how for the first time, we’ve created ways to create a Quality change agent, who can bring about Real, measurable results in ONE session.

Women are complete. And so are men. We co-exist. We do our thing. We’re both special. And man and woman together what they achieve is also interesting, which makes this world even more fun. I don’t like stereotyping based on gender. But yes, lots of superstitions and social stigma being broken now. It’s a better time today to be living than ever before. There are still some parts of the world where Women aren’t able to come out and live in the open shoulder to shoulder with a man with equal rights. That must change.